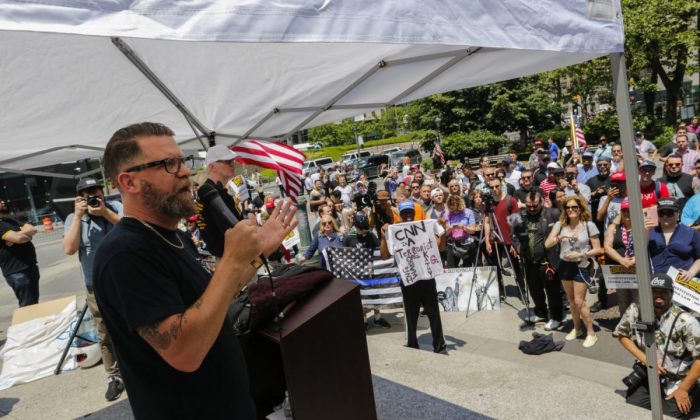 Gavin McInnes speaks at the "March Against Sharia" in New York on June 10, 2017. (Eduardo Munoz Alvarez/Getty Images)
US News

The founder of the conservative Proud Boys group has been denied a visa to Australia after he planned a speaking tour of the country that was slated to start on Dec. 5.

Gavin McInnes, a Canadian writer and comedian who founded the Proud Boys and co-founded Vice Media and Vice magazine, planned a speaking tour called “The Deplorables” across the country, but may not be able to conduct it after Australia’s Home Affairs Department determined he failed the character test to get a visa.

McInnes’s visa application was blocked with the department, he confirmed on Nov. 30.

“Good. Getting screamed at by a bunch of delusional SJWs [social justice warriors] isn’t exactly the best environment for comedy. I find it interesting that the media found out before our lawyers did,” he told News.com.au in a text message. “Fake news truly trumps the justice system in Australia—and in America for that matter.”

The Australian government didn’t confirm that he was blocked but a number of news outlets there, including the Australian, cited sources saying he was.

In a statement, a Home Affairs spokeswoman said all non-citizens entering the country had to pass the character test before getting a visa.

“For visitors who may hold controversial views, any risk they may pose will be balanced against Australia’s well-established freedom of speech and freedom of beliefs, amongst other relevant considerations,” she said.

Damien Costas, who organized “The Deplorables” tour, told News.com.au that he hadn’t been informed by the government that the application was blocked.

Former Australian Border Force chief Roman Quaedvlieg was among those celebrating the move, telling Fairfax Media he believed that McInnes would incite violence if he were allowed into the country.

“Free speech is fine but not when it crosses the threshold to the incitement of violence. I don’t think he passes the character test based on what is publicly available,” Quaedvlieg said.

The Proud Boys have been mired in controversy in the United States, with media often focusing on their clashes with the far-left extremist group, Antifa. In a recent case in New York City, it was alleged that Antifa members’ assault of a man prompted the group to intervene, and they handily beat down the Antifa assailants. Antifa members were also captured on video throwing bottles at the Proud Boys before the brawl.

Criminal charges were filed in that case against both Antifa and Proud Boys members. McInnes arranged for all his members who were charged to turn themselves in.

McInnes stressed in a video he made recently that he’s only promoted self-defense, not unprovoked violence, as Antifa has. In the video, McInnes said he was leaving the Proud Boys.

“I am officially disassociating myself from the Proud Boys in all capacities, forever. I quit,” McInnes said. “I was never the leader, only the founder.”

Referencing the pending charges in New York City, he added, “I am told by my legal team and law enforcement that this gesture could help alleviate their sentencing.”

The Proud Boys describe themselves as a pro-Western values group composed of men of all different races. Many of them support President Donald Trump.