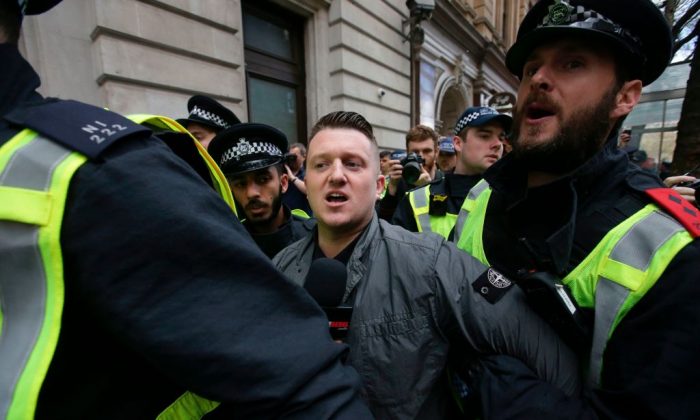 Stephen Christopher Yaxley-Lennon, AKA Tommy Robinson, former leader of the EDL (English Defence League) is escorted away by police in central London on April 1, 2017 following the deadly terror attack against the British Parliament on March 22. (Daniel Leal-Olivas/AFP/Getty Images)
UK

Tommy Robinson, a British journalist and former leader of the English Defence League (EDL) has been jailed for 13 months, reports confirmed.

Robinson was sentenced to 10 months for contempt of court and a further three months for breaching the terms of a previous contempt offense. A ban in the UK on reporting his sentence was lifted after it was challenged by the media.

The 35-year-old was arrested last Friday, May 25, outside Leeds Crown Court for filming alleged child-trafficking gang members entering the court for trial. Video footage, that was shared widely across social media shows Robinson being surrounded and arrested by police.

Tommy Robinson has been arrested in Leeds court for reporting on grooming gangs.pic.twitter.com/Hf2rXrVwrJ

Robinson, a citizen journalist, has been publicly speaking out against the threat of Islamic extremism and terrorism for nearly a decade.

In recent times, Britain has been hit by multiple child-sex scandals from gangs filled with mostly Muslim men.

The most notable case, known as the Rotherham child exploitation scandal, found that an estimated 1,400 children were abused in the South Yorkshire town between 1997 and 2013, according to a 2014 government report.

The report found that the majority of the perpetrators were Muslim men who targeted girls aged between 12 to 16. The scandal has been described as one of the biggest and worst in UK history.

The arrest of Robinson sparked massive protests outside Downing Street as supporters of free speech called for his release. There appeared to be thousands in attendance.

Meanwhile, a recent Change.org petition calling for his freedom rapidly gained over 470,000 signatures at the time of this publication.

“Tommy Robinson has been arrested and jailed for reporting on Muslim grooming gangs,” the petition states. “A job that he chooses to do with no regard for his own safety, informing the public of all the wrongs committed in the name of Allah.”

On social media, the protests continued, as users used the hashtag #FreeTommy to raise awareness. Marches across the UK have also been scheduled.

The arrest sparked worldwide attention, as hundreds of citizens in Australia also came together to protest outside a British Embassy in the country. Many held up #FreeTommy signs in both Sydney and Melbourne. Similar events took place in Canada as well.

The group that Robinson helped c0-found years ago, the EDL, is opposed to the spread of “militant Islam.”

“Our activities are peaceful. We are committed to non-violence,” the website states.