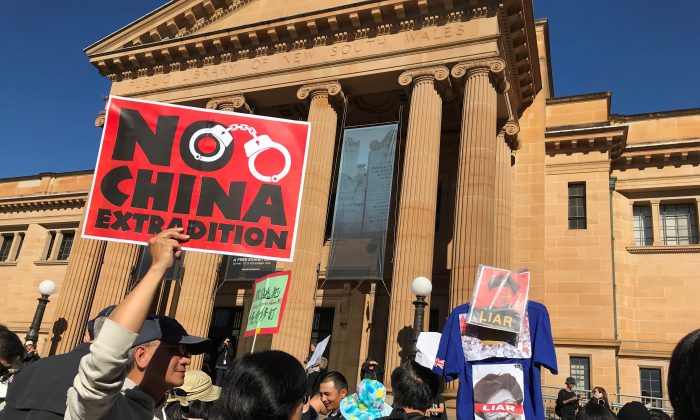 SYDNEY—Discontent in Hong Kong over a move to allow extraditions to mainland China spilled over into Australia on Sunday, with Australian Chinese gathering for a protest urging the Australian government to condemn the proposed new law.

Accountant Ida Lee, one of around 2,000 people who gathered in central Sydney, told Reuters she valued her freedom of speech, and that expatriates feared being seized by China as they traveled through Hong Kong.

“Ordinary people like me, I think, will live in perpetual fear of breaking some law in China, and as we’re passing through Hong Kong we’ll be arrested and extradited,” she said.

Hong Kong government officials have repeatedly defended the proposed bill that would allow suspects to be sent to China to face trial, saying the law carries adequate safeguards. But many of its opponents deeply question the fairness and transparency of the Chinese court system and worry about security forces contriving charges.

Protest organizer Jared Fu, a university student, called on the Australian government to condemn the proposed law, as the United States, Canada, and the European Union had done.

“Our major concerns regarding this bill include possible political persecution and human rights violations and even threats to personal safety if detained by China,” he said.

Australia’s government has not condemned the law but a Department of Foreign Affairs and Trade spokesperson told Reuters on Sunday that its consul-general in Hong Kong had raised the issue with senior levels of the city’s government.

“The Australian government is taking a close interest in the proposed amendments to the Fugitive Offenders Ordinance in Hong Kong, including to ascertain any impacts on Australian residents,” the spokesperson said via email.

Fu told the crowd the protest had been organised by volunteers and not by any political organisation in either Hong Kong or Australia.

“This is not true. We are out here today because we not only care about human rights, we also care about Hong Kong and Australians who may have connections with Hong Kong as well.”

A fleet of cars making a noisy protest outside the Chinese consulate in Sydney this week. pic.twitter.com/d1cUnTKQyr

Jacob Cheng, 62, a sales manager who moved from Hong Kong to Sydney in 1989, said Hong Kong residents had to defend their freedom and democracy for the sake of future generations.

“If Hong Kong people are not standing out (to protest) and get the law passed, the woe will pass on to our kids and their kids,” he told Reuters in Cantonese.

The protests in Melbourne and Brisbane each saw a crowd of around 500 people.

There have also been #NoToChinaExtradition protests in Melbourne, Australia. Photo: @kevincarrico.

Half a million people were expected to brave sweltering heat on Sunday in Hong Kong to press the government to scrap the proposed law.