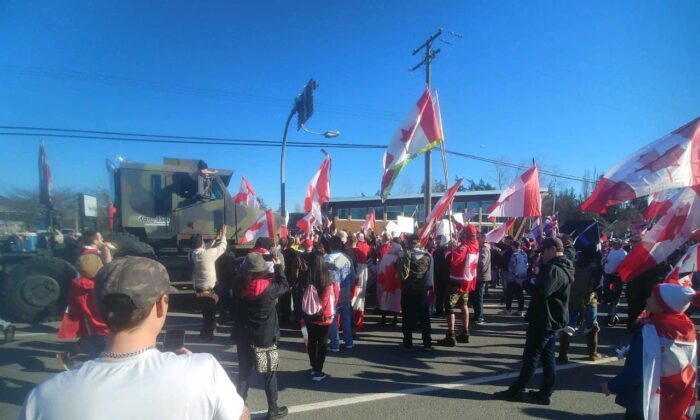 Protesters set up a blockade on the Pacific Highway to the U.S. border connecting B.C. and Washington state on Feb. 12. (Jeff Sandes/The Epoch Times)
Canada

Border crossing blocked after blockades set up by police, protesters
By Jeff Sandes

SURREY, B.C.—A few vehicles from a protesting convoy broke through an RCMP roadblock at the Pacific Highway border crossing connecting B.C. to Washington state on Feb. 12, joining other protesters who were present on foot to block the border.

RCMP had set up roadblocks on the morning of Feb. 12 to limit vehicle access to the border, only letting vehicles through after ensuring they intended to cross the border. The move was in anticipation of a large vehicle convoy heading to the border that morning.

Lanes leading from the United States were blocked by protesters who had gotten in before police set up the roadblocks.

By the time the convoy arrived at the border, police had already cut off access. Some of the vehicles, however, drove over a median to get closer to the border and block access.

The RCMP said in a press release that the “behaviour is not being tolerated” and is being investigated. The police force said no arrest had been made.

The vast majority of the protesters remained behind the police barriers, playing loud music and displaying signs demanding an end to COVID-19 mandates and restrictions.

The Pacific Highway Border Crossing is one of the busiest commercial Canada–U.S. border crossings.

The development comes as other protesters have set up blockades at Ambassador Bridge in Ontario connecting Windsor to Detroit, as well as at the Emerson border crossing in Manitoba, and the border crossing at Coutts in Alberta.

On Feb. 12, police moved in to clear the protesters at Ambassador Bridge, dispersing most of the vehicles and pushing the remaining protesters further away from the border crossing. A court on Feb. 11 issued an injunction that gave the police more power to remove the blockade.

Ontario declared a state of emergency on Feb. 11 over the Ambassador Bridge blockade and the ongoing Freedom Convoy protest in Ottawa.

The protests in Ottawa are part of a nationwide movement initiated by truckers opposed to the federal government’s requirement that all truck drivers crossing the Canada–U.S. border need to have COVID-19 vaccination. The movement grew in size as more supporters opposed to various COVID-19 mandates and restrictions joined in, converging in Ottawa on Jan. 29. Many protesters say they intend to stay until the government removes COVID-19 mandates.

Since then different protest convoys have emerged in different parts of the country and the world.

The organizers of the protest in Ottawa and elsewhere in the country are separate from each other.