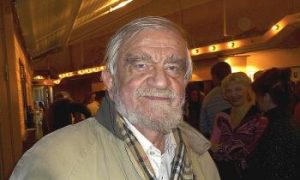 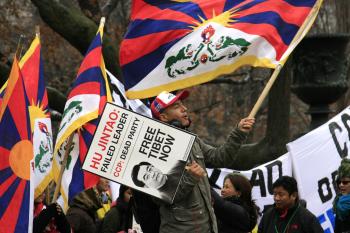 WASHINGTON—On his visit to Washington, China’s top leader Hu Jintao has been met everywhere he goes by grieving protesters speaking on behalf of the millions of Chinese people living without basic human rights under Chinese Communist Party rule.

They will be outside the White House when he has a state dinner on Wednesday, they are at the Chinese embassy, and outside the Department of State. Some will follow Hu to Chicago when he goes to meet with business leaders there on Thursday. Hu, and his entourage, will be doing their best to avoid seeing any of it, but they will hear about it.

Suppose your country is among the top 12 worst human rights violators in the world, and your leadership claims, as Hu did over the weekend in his remarks to the media, that strong economic growth proves that China’s brand of socialism is working.

When Chinese people’s homes are destroyed by the government without compensation, when police trample on citizens’ rights and brand entire groups heretical, and assault freedom of belief, such as in the case of Falun Gong, and when the government gets away with all of this within its own borders—a leader’s trip overseas is the best opportunity for protesters to be heard.

A group of 39 Tibetan organizations, 17 Taiwan rights groups, 300 Chinese democracy advocates, two hundred Uyghurs, hundreds from the Falun Gong spiritual practice, 12 NGOs including Amnesty International, the U.S. Commission on International Religious Freedom, and 32 members of Congress issued a letter to call on the U.S. government to get tough about human rights in China.

The largest event unites many of these voices. Reporters Without Borders organized a rally, scheduled for Jan. 19 at Lafayette Square Park, directly north of the White House.

In spite of drizzling rain and ice on the afternoon of Jan. 18 and in spite of the fact that Hu was not scheduled to arrive at Andrews Air Force Base until that night, a vocal group of Tibetans and a contingent of young people wearing matching blue vests from the China Democracy Party, protested outside the White House.

Both groups want the Chinese Communist Party to collapse, because they do not believe in the Party’s ability to reform itself. “Hu Jintao Is a Liar!” and “CCP is a Dead Party,” shouted about 150 Tibetans in unison.

Tenzin Dorjee, Executive Director of Students for a Free Tibet, said that Hu Jintao, who was party chief of Tibet from 1988-1992, carried out “arguably the most systematic, large-scale and sustained destruction of culture, religion and language.”

Next: The destruction of the Tibetan Buddhist temple