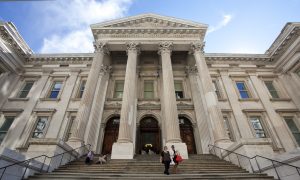 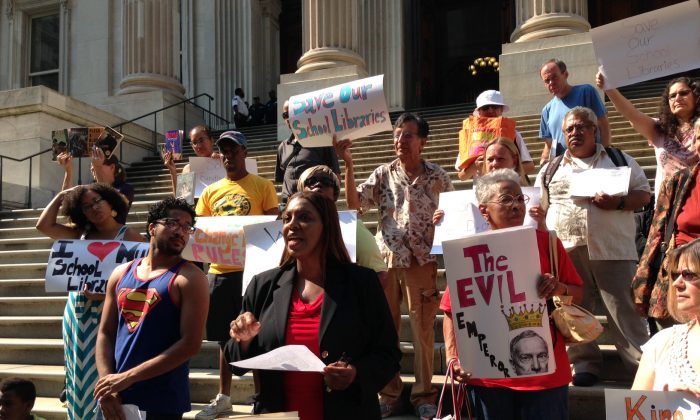 New York City Council member Letitia James speaks on the steps of the Department of Education headquarters on Aug. 21 to protest the city's request to waive a state requirement that obliges public schools to hire a librarian. (Ivan Pentchoukov/Epoch Times)
New York

NEW YORK—Just days after the city requested that school librarians be made optional, parents, teachers, librarians, and officials are already protesting.

“We cannot lose our school librarians,” said City Council member Letitia James. “Librarians who are so instrumental to our children’s education and their future success. College preparation and career readiness will be more difficult for children who do not have access to school librarians.”

Following a City Council Committee on Education meeting in May 2013, James called on the city’s Department of Education (DOE) to comply with the state mandate and hire the necessary librarians. James said it would cost the city $24 million to hire 280 librarians and meet the state mandate.

More than half of the city’s middle and high schools are already in violation of a state regulation that requires them to have a librarian. There were 333 librarians working in public schools during the last school year, according to the DOE. That number has been declining every year since 2008, according to the Wall Street Journal.

“I don’t understand the thinking behind the DOE’s proposal not to have librarians,” said Lorraine Tobierre, a mother of five children, four of whom, aged 7–13, are in public schools. “I’d like them to clear that up for me, what they think the endgame is, how they think it’s going to benefit our children.”

Tobierre said that at P.S. 298 her children do not have a library, although a space is allocated for it. The state mandates that high schools must hire librarians, while elementary schools like P.S. 298 are exempt.

The city’s request for a variance, dated Aug. 9, was made public Monday. In the letter addressed to the New York state education commissioner, the city outlines its need for flexibility in providing library services. Among the requests is one for permission to carry out the services of a school librarian without hiring anyone to perform the services.

The city also wants to be able to train teachers to fill the position of a school librarian and have smaller schools that share the same building pool resources to hire a shared librarian.