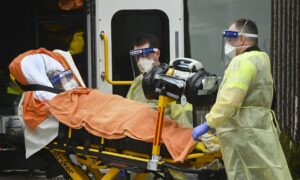 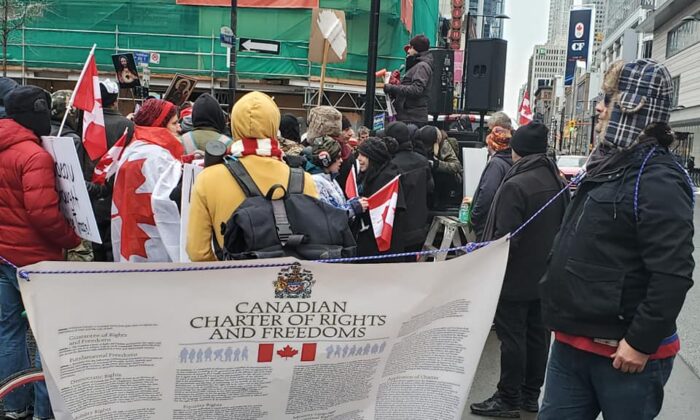 The organizer of an anti-lockdown protest held at Dundas Square in Toronto on Jan. 2 says that the ongoing COVID-19 restrictions in Canada are part of a “political agenda” from the governments and an “attack on our democracy.”

Called the “Freedom Marches,” the protest called on the municipal, provincial, and federal governments to end the COVID-19 lockdowns that are affecting small businesses and Canadians. Several hundred protesters turned up on Saturday.

According to the FFC, there have been contradicting views, peer reviews, and scientific literature related to the pandemic, but officials “intentionally suppressed or ignored” the dissenting views and went on to issue restriction orders.

Authors Dr. Barry Cooper and Dr. Macro Navarro-Génie, both senior fellows with think tank Frontier Centre for Public Policy, wrote that politicians and bureaucrats are making decisions out of fear and panic and thus implementing COVID-19 policies that are disproportionate to the problem, as detailed in their book titled “COVID-19: The Politics of a Pandemic Moral Panic.”

The authors note that inaccurate epidemiological modelling by professor Neil Ferguson of Imperial College London that predicted tens of millions of deaths worldwide in mid-March last year—advice which Ottawa heeded and turned into panic—resulted in rolling out policies such as large-scale lockdowns that were not warranted. Ferguson’s model has since been found to be greatly flawed, according to the Montreal Economic Institute and others.

Because of the “over-reaction on the part of social and political authorities, … instead of promoting their ability to keep their citizens safe, governments (especially in Canada) tried to scare them and were successful, at least in the short term,” the book says.

The authors also added that some have even benefited from the pandemic.

“There are people who have benefited from this, not necessarily monetarily but in terms of power,” Cooper told The Epoch Times, referring to “political actors” and “moral entrepreneurs” who saw the opportunity to use the pandemic as a means to expand and consolidate their power.

In a separate rally organized by The Line Canada, another advocacy group, on Saturday at Nathan Phillips Square in Toronto, protesters called on Canadians to “defend their rights and civil liberties” and “resist oppression and tyranny.”

“Our message is to end the lockdown, reopen business and raise awareness about government overreach and violation of our rights and freedoms,” The Line said, while stressing they are not anti-mask or vaccines. “Our goal is to return to work and reopen Canada.”

Hugs over Masks, another advocacy group that joined the anti-lockdown protest with FFC, had sent a letter to Ontario Premier Doug Ford urging him to roll back his lockdown orders. Ford shut down the province on Dec. 26 last year.

“Your actions are responsible for bankrupting small businesses, destroying families & potentially putting our children & other vulnerable citizens at severe risk,” the letter wrote.

“The most compassionate approach that balances the risks and benefits of reaching herd immunity, is to allow those who are at minimal risk of death to live their lives normally to build up immunity to the virus through natural infection, while better protecting those who are at highest risk,” declaration said.

For instance in Ontario, former finance minister Rod Phillips was found to be having his holiday with his wife in the Caribbean over the holidays when the province was ordered to shut down by Ford on Dec. 26 last year. He has since resigned his ministerial position.

Saskatchewan’s Joe Hargrave, who resigned as highways minister on Monday, travelled to California during the holidays when the provincial government urged people to stay home.

In Alberta, Premier Jason Kenney said Monday he had accepted the resignation of his municipal affairs minister and asked his chief of staff to step down after they took holiday trips during the pandemic.