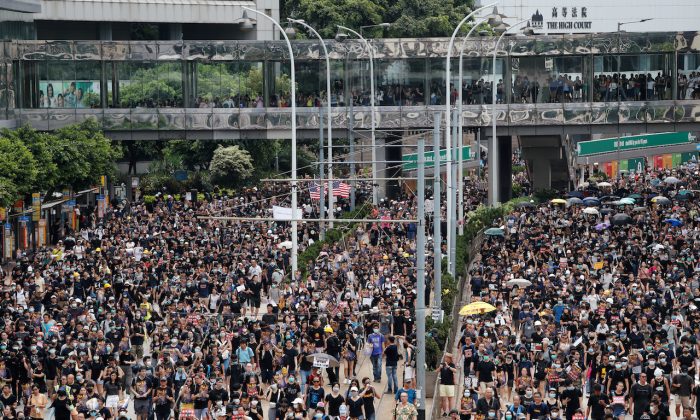 HONG KONG—Hong Kong authorities stepped up security around the city’s main China representative office on July 28 as people began gathering for another protest, with anger simmering over what many demonstrators see as increasing cycle of violence against them.

Authorities said 11 people had been arrested on July 27 on various charges including assault, possession of offensive weapons and unlawful assembly in the northern district of Yuen Long, close to the border with China.

Saturday’s march, in defiance of a police ban, was held in Yuen Long to protest against an attack on protesters by suspected triad gang members at a train station the previous weekend.

But Saturday’s protest ended in similar scenes of violent chaos with squads of riot police moving in to disperse tens of thousands of activists, firing tear gas, rubber bullets, and sponge grenades used in riot control.

Later, police stormed the same train station that had been the scene of the suspected gang attack the week before, beating protesters with batons, leaving some bloodied.

Thousands of protesters, many clad in black, assembled in a downtown park on July 28, before beginning a march in defiance of police restrictions amid chants of “Black police. Shameful”.

Some held up banners saying: “We rise as one, we fight as one,” and “Stop violence,”

“I have been to every protest and I never wear a mask,” said Phong Luk, who came to the protest wearing a Spider-Man suit to match one that his 6-year son wore.

“I’m doing nothing wrong. It is those in power that are wrong … At this point, there is nothing to be done except for Carrie Lam to step down, because she obviously cannot rule,” he added.

On July 21, protesters surrounded Beijing’s main representative office, known as the Liaison Office, in the city, vandalizing signs to the anger of Beijing.

China’s state media described it as “blatant challenge to the central government” which would not be tolerated.

On July 28, a wall of water-filled barricades was erected around the building, and bricks in pavements were glued down.

A clear plastic shield also covered a national emblem that had been defaced a week before. Scores of riot police were stationed inside the building itself, while vehicles and tourist coaches full of other officers deployed in nearby streets.

The protests over the past two months have triggered the most serious political crisis for Hong Kong since it returned from British rule to China in 1997 under a deal to guarantee it special rights and autonomy.

What began as a movement to oppose an extradition law that would have allowed people to be sent to China for trial, has taken on broader demands including the resignation of Hong Kong’s Beijing-backed leader Carrie Lam, calls for full democracy and an independent inquiry into what some say has been excessive police force against protesters.

By Vimvam Tong and Felix Tam