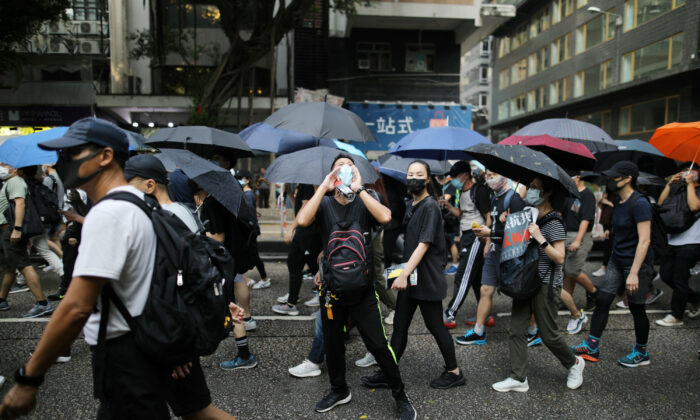 Pro-democracy protesters again took to the streets on Oct. 12 in opposition to Beijing’s tightening grip on the city. Later in the day, petrol bombs were thrown inside a Hong Kong metro station but no one was injured, the government said.

The Kowloon Tong station was seriously damaged in the attack, the government said in a statement. Riot police deployed in the streets of Kowloon and inside several metro stations afterward.

Hundreds of protesters, many young and wearing face masks, were marching in Kowloon at the time and were headed to a district near the Kowloon Tong station.

“No crime to cover our faces, no reason to enact (anti-mask) law,” protesters chanted. “I have the right to wear masks!”

The Hong Kong government introduced colonial-era emergency laws last week to ban the wearing of face masks at public rallies, a move that sparked some of the worst violence since the unrest started in June.

Protesters elsewhere set fire to a government office in Kowloon and vandalized shops and metro stations, the government said.

There were no skirmishes between protesters and police and by nightfall protesters had dispersed into small groups scattered around Kowloon.

Hong Kong’s protests started in opposition to a now-abandoned extradition bill but have mushroomed in four months into a pro-democracy movement and an outlet for anger at social inequality in the city, an Asian financial hub.

The protests have plunged the city into its worst crisis since Britain handed it back to China in 1997 and is the biggest popular challenge to Chinese President Xi Jinping since he came to power in 2012.

The protests have been driven by a concern that China has been eroding Hong Kong’s freedoms, guaranteed under a “one country, two systems” formula introduced with the 1997 handover.

The now-withdrawn extradition bill, under which residents would have been sent to Communist-controlled mainland courts, was seen as the latest move to tighten control.

China denies the accusation and says foreign countries, including Britain and the United States, are fomenting unrest.

“I stand with the people of Hong Kong calling on the government of China to honor the promises it made to the world when it promised to maintain political freedom in Hong Kong,” said Cruz, a vocal critic of China, who was dressed in black in solidarity with pro-democracy activists.

Hong Kong had experienced relative calm since last weekend, when a peaceful march by tens of thousands spiraled into a night of running battles between protesters and police.

Since then there had only been small nightly protests and activists had not flagged any major action this weekend.

A small group calling itself the “Silver-Haired Marchers” began a 48-hour sit-in at police headquarters on Saturday, describing themselves as “old but not obsolete”.

“The young people have already sacrificed a lot, it is about time for us, the senior citizens in Hong Kong to come forward to take up part of the responsibility from the young people,” 63-year-old Shiu told local media.

“I mean for us, even if we are caught by the police because of an illegal gathering, I don’t mind,” said Shiu, who was identified with only one name.

Police have arrested more than 2,300 people since June. Since September nearly 40 percent were under the age of 18 and 10 percent under 15.

Some protest marchers on Saturday covered their faces with photocopies of the Chinese president’s face, others with “V for Vendetta” Guy Fawkes masks, and a group of protesters plan a “face mask party” on Saturday night.

The face mask ban carries a maximum one-year jail term, but thousands, including school children and office workers, have defied the order.

Hong Kong’s police are also facing a crisis of confidence amid the worsening political tensions. Protesters accuse them of using excessive force, which police deny, and two protesters have been shot and wounded during skirmishes with police.

Hong Kong is facing its first recession in a decade due to the protests, with tourism and retail hardest hit.

Many shops have been shutting early to avoid becoming a target of protesters and due to closures of the damaged metro. Some stations on the network were closed on Saturday after being targeted.

Protesters have also targeted China banks and shops with perceived links to China, as well as U.S. coffee chain Starbucks, which had a store in Kowloon trashed on Saturday.