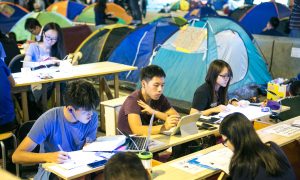 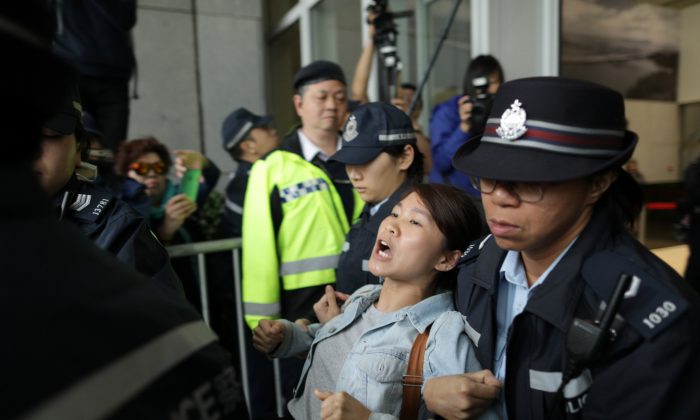 A protester is arrested by police after storming Hong Kong government headquarters over a proposal to extradite fugitives to mainland China, in Hong Kong, China on March 15, 2019. (Stanley Leung/Reuters)
Hong Kong

HONG KONG—Hong Kong police on March 15 arrested five women who staged a protest inside the government’s headquarters over a proposal to allow fugitives to be extradited to mainland China, stoking human rights concerns.

In February, Hong Kong’s Security Bureau submitted a paper to the city’s legislature, proposing amendments to extradition laws that would include granting the city’s leader executive power to send fugitives to jurisdictions not covered by existing arrangements, including mainland China and Taiwan.

The proposal has been strongly opposed by some lawmakers, legal and rights groups who fear such it could be exploited by Beijing’s Communist Party leaders and lead to an erosion of Hong Kong’s judicial independence.

In video footage posted online, the five, who were demanding the extradition amendments be scrapped, rushed into the lobby of government headquarters where they staged a sit-down protest.

“Oppose legalized kidnapping,” the women, including several members of the pro-democracy party Demosisto, shouted. They were later hauled out by police into vehicles.

The Hong Kong government said in a statement a total of nine protesters were “removed” for blocking the lobby of its headquarters, and that a female security guard had been injured in a skirmish. A police spokesman gave no immediate comment.

Since Hong Kong reverted from British to Chinese rule in 1997 with the guarantee that it would enjoy a high degree of autonomy and freedoms not allowed in mainland China, there has been no formal mechanism for the surrender of fugitives to mainland China.

The Hong Kong Bar Association said in a statement that this was not an oversight, but a result of “grave concerns” about China’s legal and judicial system.

It said authorities were “jumping the gun” in seeking to force through such ad hoc rendition arrangements with China without a full consultation.

Some business groups, including the American Chamber of Commerce, expressed “serious reservations” about the proposal in a submission to Hong Kong’s Secretary for Security John Lee, and said they would “undermine perceptions of Hong Kong as a safe and secure haven for international business operations.”

The proposal also seeks to remove legislative oversight on individual extradition requests that may arise by giving the city leader executive authority to make such decisions.

In the February paper, the Security Bureau said “human rights and procedural safeguards” would remain unchanged. Requests in relation “to offenses of a political character” shall be refused, the bureau said.

But some critics have expressed concern over how a political offense might be defined.

Demosisto, in a statement, described the proposed extradition reform as “an attempt to prepare to entrap oppositional voices for China.”

A former Chinese deputy minister for public security, Chen Zhimin, told reporters in Beijing this week that more than 300 “fugitives” wanted by mainland authorities were hiding in Hong Kong. He did not give details.