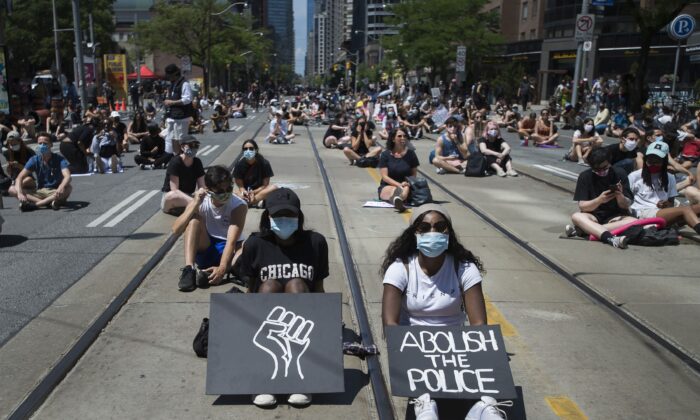 Thousands of people protest to defund the police in support of Black Lives Matter in Toronto, Canada, on June 19, 2020. (Nathan Denette/The Canadian Press)
US News

An Ohio woman who died after she was tear-gassed during a Black Lives Matter protest died of natural causes, according to an autopsy.

Sarah Grossman, 22, died two days after she attended a protest in Columbus on May 28, days after George Floyd died in Minneapolis police custody. She was exposed to tear gas and pepper spray that was discharged into protesters to control crowds, according to 10News and other news outlets.

She died on May 30 after family members found her unresponsive in their home in Centerville. Her family members claimed on social media that she died of being exposed to tear gas and pepper spray.

The Montgomery County Coroner’s Office said Grossman, who recently graduated from Ohio State University, died of a coronary artery dissection due to Ehlers-Danlos Syndrome. Her manner of death was described as natural, officials said in the 10News report.

A preliminary autopsy report said she was taken to Sycamore Hospital after suffering from cardiac arrest and was foaming at the mouth.

On May 31, her father told the Montgomery County Coroner’s Office that Grossman was at a protest and was “exposed to tear gas and pepper spray” that was “discharged by police as part of crowd control,” the Dayton Daily News reported.

“Sarah was a fierce but compassionate supporter of environmental issues and social justice,” her family wrote in an obituary. “Those who knew her will understand what a beautiful soul the world has lost. She lived a short but full life.”