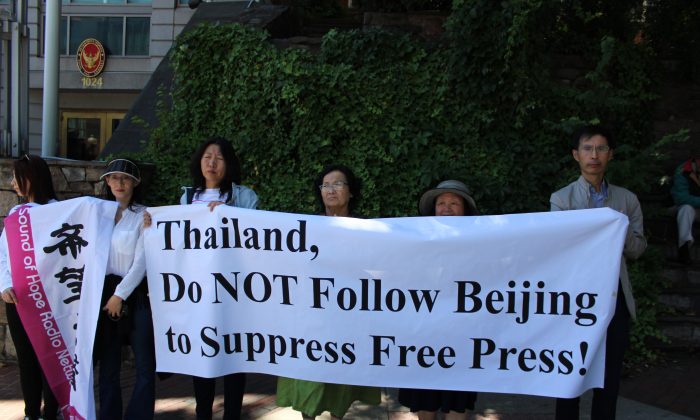 Protesters hold a sign opposite the Thai Embassy in Washington on June 14, 2019. (Joan Chang/The Epoch Times)
US News

WASHINGTON—A press conference and rally held Friday in front of the Royal Thai Embassy called on Thailand to free a volunteer from Taiwan who had helped a U.S.-based radio network deliver uncensored news and information to China.

The Sound of Hope Radio Network (SOH) organized the event to protest the detention of Chiang Yung-Shin. Chiang, a Taiwanese national, had helped SOH by leasing a house in Thailand used for its shortwave radio broadcast into China. SOH had previously staged a protest concerning Chiang’s detention in front of the Embassy in February.

According to SOH’s press release, Chiang is a top executive of a Taiwanese company in Thailand. The house leased for the shortwave site was raided by Thai police in Aug. 2018, and Chiang was arrested on Nov. 22. Police in Thailand told SOH both actions were taken under the pressure from the Chinese Communist regime.

Frank Lee, spokesman of SOH, said at the rally, “Giving in to the pressure from Beijing to suppress a free press is not good for Thailand and its people. Mr. Chiang is a volunteer who helped SOH, and he didn’t do this for his own gain.” Lee urged the Thai government to free Mr. Chiang so that he can return to his wife and two children in Taiwan.

SOH reiterated a previous statement that “broadcasting uncensored information using shortwave equipment to totalitarian countries is an international norm” that brings no harm by any means to Thailand. The Chinese Communist regime constantly censors news on its human rights violations and religious persecution, as well as objective news reports from around the world.

During the rally, Lee delivered a letter from SOH President Allen Zeng urging Thailand to free Chiang. He said the embassy officials accepted the letter.

In the letter Zeng said he was aware “The Thailand police action was influenced by the Chinese government…the Chinese Embassy is directly behind the case. Over the last 20 years the Chinese government has tried in every way to mute all voices that could expose their crimes. They have arrested journalists, threatened or bought out people, unleashed lies through their media, and in this case in Thailand, shut down this shortwave radio.”

A Voice from China

Chunmei Ma, a lady from China who was rescued by the United Nations Refugee Agency a few years ago, spoke at the rally. Because she is a Falun Gong practitioner, she was put into labor camps two times and kidnapped four times while she was in China. She said the torture and abuse she suffered at the hands of the Chinese Communist regime brought her near to death. Finally, Ma escaped to Thailand and sought asylum with the U.N. Refugee Agency there.

The Chinese Communist Party (CCP) has persecuted the spiritual practice of Falun Gong since 1999. It fears the large number of people who practice Falun Gong, and the appeal of its traditional moral teachings.

“At the critical turning point of our age, I hope the Thai government could recognize the nature of the CCP, keep away from it, and do not work with it. Uplift justice, and free Mr. Chiang. If so, your good deed will bring happiness and honor to you, your family, and your country.”

SOH is based in San Francisco. It serves Chinese Americans in over ten cities in the States and has provided shortwave radio service to China since 2004.

Pat Smiles, who lives in Middletown, New York and is an editor for an online news site, traveled to D.C. only to join the protest and rally.

“What happened to Mr. Chiang is unfair, and it’s the CCP being a bully. This is a man doing a good deed who was persecuted unfairly. The Thai government is letting China influence them to do wrong things. If we as a body of concerned citizens don’t stand up and say something, it’s just not right…American people need to know this and what the CCP has done to the free world,” Smiles said.

“The Chinese regime should know the free world will not bow to their bullying.”

“Mr. Trump is the first president to stand up to China,” Smiles said. “Unlike previous administrations who were held back by the economic gains from China, the Trump administration is not tip toeing in its policy to China. What Trump does helps not only Americans but the Chinese people too. He has also shocked the CCP.”