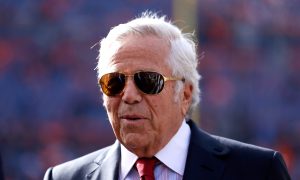 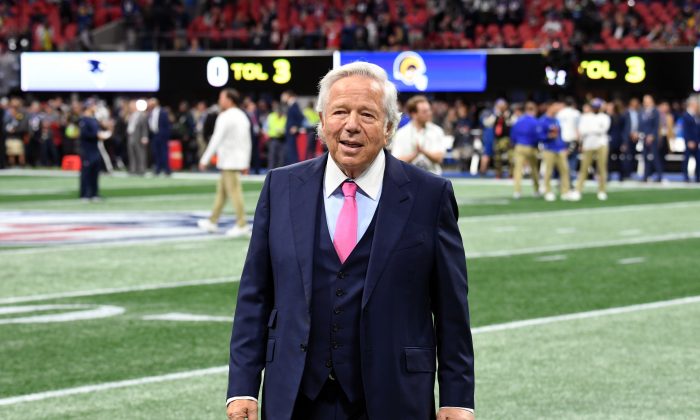 Florida prosecutors have reportedly offered to drop the charges against New England Patriots owner Robert Kraft and other men involved in a prostitution case in a plea deal—but only if they concede that they would have been proven guilty at trial.

As part of the deal, Kraft and the 24 other men charged with soliciting prostitution must also perform 100 hours of community service, attend an educational class on the dangers of prostitution, and pay $5,000 per count, spokesman Mike Edmondson of the Palm Beach State Attorney’s Office said on March 19.

Dave Aronberg, the state attorney for Palm Beach County, noted that the offer isn’t out of the ordinary. Kraft himself was charged with two counts last month; Kraft has denied wrongdoing.

“The offer of a deferred prosecution agreement with several conditions to first-time offenders is standard in cases like this,” Aronberg said on March 19 on Twitter.

Correction: The offer of a deferred prosecution agreement with several conditions to first time offenders is standard in cases like this. https://t.co/6TvDHQo5fZ

If anyone accepts the offer, the charges of misdemeanor soliciting prostitution will be dropped; Edmondson said no one has accepted the plea deal so far. The plea deal was first reported by The Wall Street Journal.

The tactics used by police in Jupiter, Florida, to obtain search warrants for the investigation have raised questions from some legal experts, the Journal reported. Police said they intended to stop a growing human-trafficking problem, but no one was charged with human trafficking in the case. Prosecutors’ affidavits also haven’t detailed any evidence of human trafficking at the Orchids of Asia Day Spa.

“The police are making the case that this is a major human-trafficking ring, and that’s why it’s so serious,” said Duncan Levin, a former federal prosecutor and managing partner of Tucker Levin, PLLC, who isn’t connected to the case, according to the Journal. “The fact that they had cameras installed in the locations for so long somewhat undermines the claim that there was an extraordinary danger to the people working in the establishment.”

As part of a crackdown on illicit massage parlors and human trafficking, about 300 men were charged and 10 massage parlors were shuttered in multiple counties between Palm Beach and Orlando. Several operators and employees also have been charged.

Police say Kraft visited the Orchids of Asia Day Spa in Jupiter, Florida, twice in late January, just before he flew to Kansas City to see the Patriots defeat the Chiefs in the AFC Championship game.

According to police records, the 77-year-old Kraft was chauffeured to the massage parlor in a 2014 white Bentley on the evening of Jan. 19, where officers say they secretly videotaped him engaging in a sex act and then handing over an undetermined amount of cash.

Investigators said Kraft returned 17 hours later, arriving at the upper-middle class shopping center where the spa was located in a chauffeured 2015 blue Bentley, the documents said. Kraft, who is worth $6 billion, was videotaped engaging in sex acts before paying with a $100 bill and another bill, police said. Hours later, he was in Kansas City for the game.

The National Football League hasn’t taken any action against Kraft, but has said its personal conduct policy “applies equally to everyone in the NFL” and it will handle “this allegation in the same way we would handle any issue under the policy.”