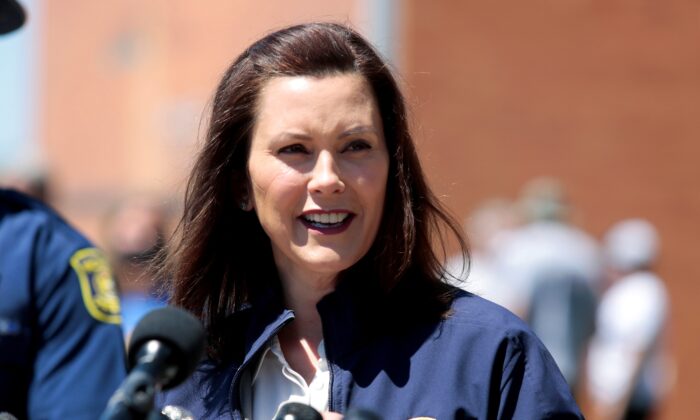 Michigan Gov. Gretchen Whitmer addresses the media in Midland, Mich., on May 20, 2020. (Rebecca Cook/Reuters)
US News

After hearing from more than a dozen witnesses over seven days of testimony, federal prosecutors rested their case on Thursday against two men charged with conspiracy to kidnap Michigan Governor Gretchen Whitmer just before the 2020 election.

The men are also charged with conspiracy to use explosives to facilitate a getaway.

This is the second trial this year for defendants Adam Fox, 38, of Wyoming, Mich., and Barry Croft Jr., 38, of Delaware on the same charges.

The pair and four other suspects were arrested by the FBI in October 2020 before any kidnapping attempt or attempted bombing took place.

The first trial of Fox and Croft ended in April when the jury, after five days of deliberation, deadlocked and failed to convict either man of any crime.

The same jury acquitted two of the suspects, while two more pleaded guilty.

Eight other suspects were arrested and are facing state charges.

In the latest trial, the prosecution has tried to prove that Fox and Croft were ringleaders in a serious plot to kidnap Whitmer, a Democrat, from her summer home in Elk Rapids and blow up a bridge to slow down the response time of police.

Prosecutors sought to demonstrate that Fox and Croft were determined domestic terrorists who were predisposed to such actions months before the FBI sting operation began.

The defense contends that its clients were loud-mouthed braggarts without a concrete plan, who were egged on by two undercover FBI agents and 12 other FBI operatives in a case of entrapment.

Under cross-examination by the defense, the prosecution’s star witness, militiaman turned FBI informant, Dan Chappel, testified that defendant Croft didn’t know what was going on when he was picked up for a nighttime surveillance mission of Whitmer’s summer home near Elk Rapids.

Defense attorneys brought out that three undercover FBI men and Croft were in the truck used for the surveillance.

When defense lawyers pressed Chappel about the more than $50,000 the FBI paid him for his services as being a powerful incentive for his cooperation, Chappel stated his motive, “I wanted to stop people from doing bad things to good people.”

Under questioning, Chappel explained why he suggested ways to damage Whitmer’s home and his comments about the idea of shooting at the dwelling and making it pass for a hunting accident.

He said he had to play along to gain acceptance by the group.

Prosecution witness Ty Garbin, one of the two men that had previously pleaded guilty in the case and is serving a six-year prison sentence, acknowledged under cross-examination by Fox’s attorney Chris Gibbons, that Fox was never included in the group’s online leadership chat or general chat.

Another prosecution witness, Kaleb Franks who pleaded guilty before the first trial and is awaiting sentencing, testified that he never heard Fox or Croft express any reservations about committing the kidnapping.

Franks also said he never heard Chappel or the FBI operative who was posing as an explosives dealer, try to persuade Fox and Croft to kidnap Whitmer.

The defense pointed out that five times Fox was offered a credit or gift card with a $5,000 limit that he could use to purchase explosives, but he turned the offers down.

When Franks was asked how he regarded Fox and Croft, he said he viewed them more as operatives than leaders.

It’s been a rough trial for the jury as well, with two jurors having to be excused for testing positive for COVID-19, one juror allegedly making potentially prejudicial comments before being seated, and the discovery that the daughter-in-law of another jury member allegedly smoked pot with defendant Fox at the boat ramp near Whitmer’s home in 2020.

On Friday, it’s the defense’s turn to make their case.

If convicted, Fox and Croft could face up to life in prison.

The trial is expected to conclude in a day or two and go to the jury.