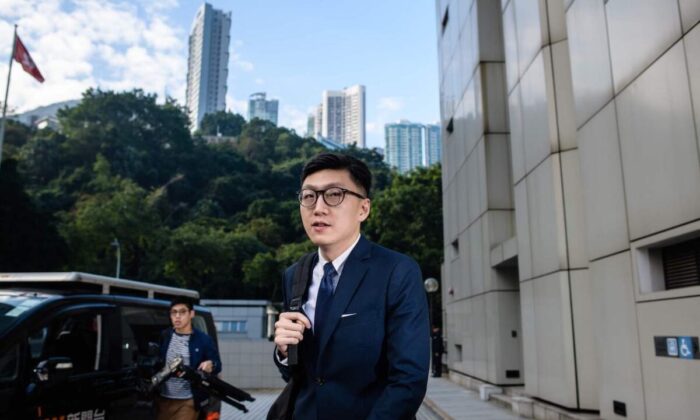 Leung left Shek Pik Prison on Lantau Island in the early hours on Jan. 19, under special security arrangements intended to keep his release low-profile. The day before, Leung’s social media sites called for people to stay away from the remote prison where he had been held.

According to the South Morning China Post (SMCP), prison inmates are usually released at around 9 a.m., whereas Leung’s release was around 3 a.m, likely intended to avoid media interviews.

Later, at 5.30 a.m., Leung’s Facebook page posted that he had peacefully reunited with his family.

“After a separation that lasted four years, I would treasure my valuable time with my family and return to a normal life with them,” the post said. “With a sincere heart, I thank each and everyone for their care and love.”

However, concerned that Leung will remain politically influential after his release, the authorities in Hong Kong required him to abide by a “supervision order,” keeping him away from the spotlight.

In the post, Leung added that he would observe a supervision order under the law—stay away from the spotlight, stop using social media, and turn down visits and interview requests from the press, SMCP reported.

Shortly after, Leung’s Facebook profile was deleted by 6.30 a.m.

According to SMCP, a government source said that Leung is labeled as a “sensitive figure” by the authorities.

In a TV interview with The Epoch Times, Herbert Chow, CEO of Hong Kong’s children’s clothing brand Chickeneduck, said that releasing Leung at 3 a.m. has instead drawn more attention to the case, the opposite result of what the authorities had intended.

A viewer of the show left a comment describing Leung’s release as “leaving a small prison while entering a bigger one,” referring to Leung’s forced compliance to the supervision order and potential police surveillance.

Shiu Ka-chun, a former Hong Kong legislator, told Radio Free Asia that the supervision order is usually applied for released prisoners involved in serious crimes. And the general supervision period is one to two years. By liaising with supervisors, violators can be recalled to prison for a continued prison sentence.

As for whether the supervision order could restrict a person’s access to social media or the press, Shiu said he had never heard of such a usage. But he did not rule out Hong Kong’s Correctional Services Department of having that power.

Leung was a prominent independence activist and the spokesperson for Hong Kong Indigenous, a pro-independence group in the city that was outspoken about “localism” and the need to preserve a Hong Kong identity.

The 30-year-old activist was jailed for his role in the 2016 Mong Kok riot, sparked by scuffles between street hawkers and municipal staff on the first day of Lunar New Year, which escalated into violent clashes between police and demonstrators, according to SMCP.

Leung was sentenced in 2018 to six years in a maximum-security prison for alleged rioting and assaulting an officer. However, his sentence was reduced by two years for good behavior, hence his early release, local media said.

Throughout his jail term, Leung rarely released public statements on developments in the city. During the wave of social unrest in 2019, he urged demonstrators “not to be dominated by hatred,” saying the bloody scenes from the protests pained him, citing SMCP.

In 2020, while Leung was still in prison, Beijing imposed a sweeping new national security law in Hong Kong aimed at stamping out opposition to the ruling Chinese Communist Party (CCP) in the former British colony. Any advocacy of Hong Kong’s independence is now banned under the new law.

Leung is also famous locally for having popularized the phrase “Liberate Hong Kong, Revolution of Our Times,” which was prominent during protests in 2019.

In 2021, Hong Kong authorities criminalized the use of this phrase in the first trial against another young man, Tong Ying-kit, under the territory’s new National Security Law.

Despite the CCP’s intensified crackdown on political dissents, Leung inspired strong support for ideas about Hong Kong’s identity and autonomy.

In November 2019, Edward Leung was chosen as one of Time Magazine’s “100 NEXT” rising stars shaping the future, alongside some of the world’s most influential people in business, entertainment, sports, politics, science, health, and more.