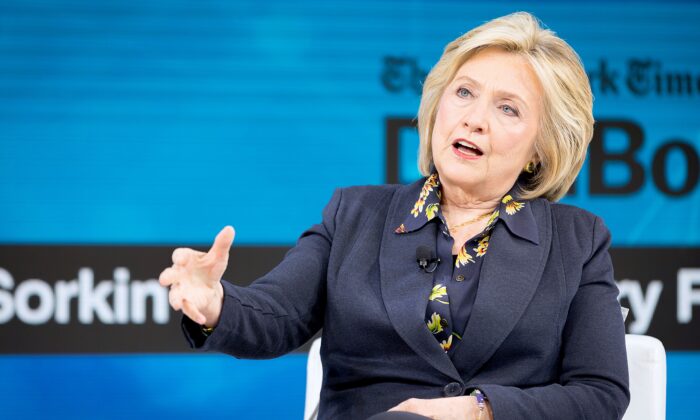 Psychologists define “projection” as the attribution to others of attitudes or behaviors that belong to oneself.

A bully blames his victims for being overbearing and peremptory.

A swindler accuses an innocent mark or rival of engaging in the same dishonest behavior he himself is practicing.

Here’s a real-life example: “Computer scientists have apparently uncovered a covert server linking the Trump Organization to a Russian-based bank.”

In the lexicon of psychopathology, I suppose that “projection” is generally held to be un- or only semi-conscious. In the realm of criminality, of which our politics, alas, has become a subset, the behavior seems to be deliberate, if also angrily defiant.

Item: What do you mean by wipe a computer server? “Like with a cloth or something?”

But of course, Clinton wasn’t laughing when she said that.

She was petulant and defensive.

I doubt she’s laughing now, either.

On Feb. 11, John Durham, the world’s most phlegmatic and ant-like prosecutor, filed a motion charging that the Clinton campaign paid a technology company to tap into (“infiltrate”) servers at Trump Tower; and then, after Donald Trump became president, at the White House in order to “gather derogatory information about Donald Trump” and promote the (utterly false) narrative that Trump was in cahoots with the Russians.

I include italics for the phrase “at the White House” to underscore the gravity of the charge. They spied on the president by monitoring internet traffic at his New York apartment and “the Executive Office of the President of the United States.”

Remember when Trump complained that his communications at Trump Tower were being “tapped”?

How the left scoffed at that.

It turns out Trump didn’t know the half of it.

What Durham has charged—and, does anyone doubt that his charges will pan out?—is a splendid illustration of the old saw that things are always worse than they seem.

Remember Michael Sussmann? He was the Clinton lawyer who is currently under indictment for lying to a federal agent.

If he were a Republican, he would probably have been bankrupted by legal fees and be facing 20 years in the slammer.

As it is, you can see the cocoon of Democratic maneuvering and special pleading being spun around him, just as it was spun around Kevin Clinesmith who altered an email, i.e., forged evidence in order to obtain a FISA warrant against Carter Page.

Clinesmith was sentenced to—probation. And was recently quietly rehired by the FBI.

Imagine if anyone in Trump’s circle had done what he had done.

According to Durham, Sussmann “had assembled and conveyed the allegations [of Trump’s supposed connection to the Russians] to the FBI on behalf of at least two specific clients, including a technology executive (Tech Executive 1) at a U.S.-based internet company (Internet Company 1) and the Clinton campaign.”

Moreover, Durham’s motion charged that billing records show that Sussmann “repeatedly billed the Clinton Campaign for his work on the Russian Bank-1 allegations,” i.e., the spurious reports that Sussmann put together to suggest a connection between Trump and Alfa Bank, the largest private bank in Russia.

Trump himself responded with condign anger to the revelations.

Durham’s motion, he said in a statement released on Feb. 12, provides “indisputable evidence that my campaign and presidency were spied on by operatives paid by the Hillary Clinton campaign, in an effort to develop a completely fabricated connection to Russia.”

“This is a scandal far greater in scope and magnitude than Watergate,” Trump said, “and those who were involved in—and knew about—this spying operation should be subject to criminal prosecution.”

But back to the subject of projection: The allegations lodged by Durham show the Democrats doing exactly what they accused Trump of doing.

Will they be “subject to criminal prosecution,” as Trump said they should be?

The bookies are giving 8–5 odds against that.

Why? For the same reason that Clinton could go before Congress, lie about the Islamic terror attack on our consulate in Benghazi, Libya, in 2012 and get away with it by asking angrily, “What difference at this point does it make?”

The likely result is that the political establishment will close ranks to protect itself.

They will be aided by a compliant media, which will bend over backward to find excuses, or half excuses, to show why what the Dems did really wasn’t so bad.

We will be told that Durham’s evidence doesn’t show what Trump says it does; that the case is really about subsidiary issues; that Durham isn’t really going after anyone at the center of the scandal.

The overriding goal, as always, will be to hobble Trump and prevent him, or anyone like him, from running in 2024.

I don’t think that will work. But even if it does, it’s worth noting that Donald Trump isn’t the only one who is furious about this latest development.

The proverbial cat is out of the bag.

Hold on: It’s going to be a bumpy ride.