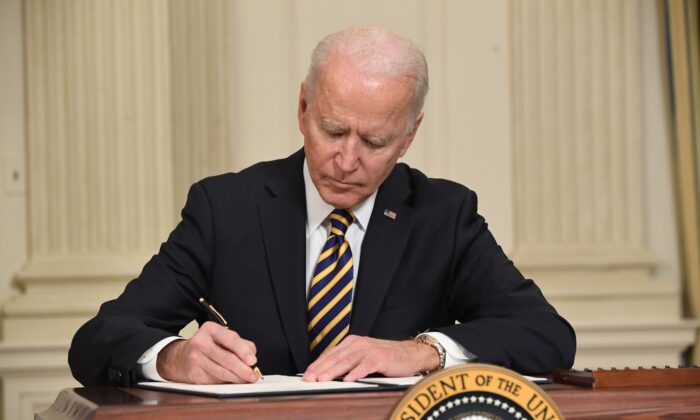 President Joe Biden signs an executive order in the State Dining Room of the White House in Washington on Feb. 24, 2021. (Saul Loeb/AFP via Getty Images)
Viewpoints

Progress and Its Deluded Enemies

That’s a lot of bio stuff. Here is a screenshot. This isn’t English. It’s something else.

The only real takeaway from these 5,000 words of gibberish is that the Biden administration really favors bio everything. Bio means you. It means all of us.

Commentators quickly came to the conclusion that this executive order has something to do with transhumanism, the idea that in the future, computers and people will blur into a single new form that will gradually substitute human intelligence as we know it with artificial intelligence, and, hence, create something better than ever.

It’s odd. I don’t recall Biden having campaigned on this goal. I have no clue where the administration found the stoned and deluded technogeek silly enough to pound out this gobbledygook. Maybe they borrowed an essay from an Adderall-fueled Ivy sophomore doing an all-nighter for the final in an easy-A class on futurism.

Yes, it rightly gives rise to memories of Victorian-era novels such as “Frankenstein,” which serve as great warnings of the abuse of science in service of the pretense of knowledge. The end result is only tragedy. This seems perfectly obvious to anyone schooled in the history of politics and its unity with science.

Incredibly, this strange obsession with getting to the singularity by force hasn’t been set back at all by the experience of the past three years. Science—fake science backed by no evidence or experience—ruled, overriding the will of the people and their representatives. The administrative state, under the guidance of experts, attempted a full manipulation of the human experience, ending choice and freedom for billions of people on the theory that doing so would somehow control and outwit a tiny pathogen.

They completely failed, and left devastation behind. Every measure of human experience has turned south. Educational outcomes have plummeted as child abuse rose. Excess deaths are extremely high and not from COVID but from lockdowns. Enterprise has been severely harmed. The cause of economic freedom in the United States and around the world has been set back 40 years at least.

The scandal is so intense that it’s hard to think about, which is why so many people are just ready to move on and forget, as people do following a natural disaster or war. Some memories are too painful. The problem with not remembering, however, is that we don’t learn either. That means that we don’t apply the lessons.

Clearly, the Biden administration has learned nothing. But here’s a more frightening thought. What happened to us, some people might actually consider progress. This is a serious concern.

We need only look back to Dr. Anthony Fauci’s September 2020 co-authored essay from Cell. That’s the one that called for a “new infrastructure of human existence.” Strip away the verbiage, and you have a terrifying dystopian vision. It’s a world without cities, without fossil fuels, without pets, without meat, without human migration, and without any freedom whatsoever.

The essay begins with the claim that things began going wrong with the human experience 12,000 years ago. That’s when people first started migrating, planting crops, and domesticating animals, and trading. This unleashed disease, they report. Presumably before then, when we were living by rivers like impoverished and wretched worms, we were disease-free even though few humans lived for more than 25 years.

It’s a very strange and even terrifying piece of writing, but it serves as a reminder. Well-to-do, privileged, powerful, and highly educated people can dream up and believe incredibly stupid things. It’s like there’s no check on their imaginations. They often possess unconstrained imaginations, as Thomas Sowell explained.

It’s time we started taking crazy people seriously. For generations, for example, elites have complained about overpopulation. We hardly paid attention to their ramblings, but it’s all too creepy to contemplate. After all, despite the anodyne term overpopulation, what they are really saying is that there are far too many people and we will all be better off if many of them die and those left be restricted in their ability to procreate.

We’ve all listened to this prattle for decades and never imagined for an instant that they would get their way. And yet, when you look at how COVID patients were treated in the early months of the pandemic, shoved in small rooms alone and vented until they kicked the bucket by the thousands—this approach rather than permitting doctors to give humane therapeutics—one really does wonder what was going on here.

Looking back to generations earlier, we bump into another elite class of intellectuals whose minds were utterly possessed by eugenic fantasies of curating the human race to the point of perfect purity by eliminating everyone they deemed to be unfit. Read any of the high-level journals from the 1890s to the 1930s and this stuff is as hard to miss as it is hard to read. We knew by the mid-1940s, when the horrifying reality of death camps became impossible to deny, exactly where this line of thinking led, and, henceforth, it became unfashionable.

What’s not unfashionable, however, is for ruling-class intellectuals to dabble in insane ideological imaginings and using the power of the state to realize them. At their cocktail parties and private events, especially those lucky enough to tap into the bank balances of the Bill & Melinda Gates Foundation, they will toss off bromides about how humans and machines will soon merge and thus enable the deserving few to live forever on this earth.

It’s a line of thought that would be jeered in any machine-shop break room anywhere in the world. But the ruling-class elites who think this way have constructed social bubbles where they never have to confront real people with common sense. Between their private jets, private clubs, private dining rooms, and remote villas with five times more servants than residents, they can persist in such illusions for decades.

When one considers the lockdowns and mandates of 2020–22, one gains the picture of a world ruled by just such people and ideas. It was completely delusional but the people who did this to us were truly convinced that they were doing exactly the right thing. They have a different view of progress than you and I.

The idea of progress itself traces to the late Middle Ages. It meant longer lives, more opportunities, the democratization of prosperity, human rights for ever more people, and laws that restrained the power ambitions of crazy people. Through fits and starts and with some dramatic interruptions in the form of war and depression, we saw the gradual unfolding of the idea of progress. We began to imagine a timeline of the historical trajectory that generally trended upward, at least as we understood that term.

Not everyone shares that view. By every measure, we have experienced terrible setbacks in this upward trajectory. We are less free, less prosperous, and therefore less hopeful than we’ve been in decades. The grim reality, however, is that some people—many of them still in charge—look at the work of their hands and are proud of a job well done. It’s the Joker’s view of what constitutes progress.

When we try to make sense of this new executive order, keep this point in mind. It makes sense to someone somewhere, and that person had enough access to power to get it into print.