Chapter Four: The Specter of Communism is Relentlessly Destroying Humankind
0 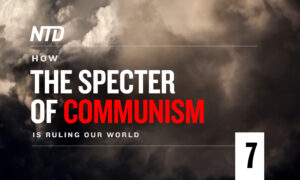 Special TV Series Ep. 7: Infiltrating the West Pt. 1
0
How the Specter of Communism Is Ruling Our World

NTD has produced a special TV series adapted from the book “How the Specter of Communism Is Ruling Our World,” by the editorial team of “Nine Commentaries on the Communist Party.” Watch the fourth episode, “Mass Killing in the East Pt. 2,” here.

A century has passed since the Communist Party seized power in the Soviet Union. According to records compiled by the U.S. Congress, communist regimes have been responsible for the deaths of at least one hundred million people. The Black Book of Communism details this history of murder, drawing on documents declassified by the governments of nations in the former Soviet Union and Eastern Europe, as well as records on the victims of communist political campaigns in China, North Korea, and other communist countries.

Communist regimes carry out intense political purges among their own ranks and select the cruelest of leaders, particularly when it comes to those who are purged simply for deviating on specific issues while otherwise being wholly loyal is difficult for many to understand the rationale behind the barbarity inflicted by communist parties upon their own cadres to the party and its leadership. One reason is that the communist specter, in its rebellion against the divine and humankind, possesses an instinctual fear that its doom is always around the corner. To reinforce itself, the specter needs individuals who have no regard for moral right and wrong. These individuals are identified by their brutality during mass killings, and their elevation to positions of party leadership enables the specter to ensure the perpetuation of its earthly tyranny.

Another of its motives for killing is to recruit participants from general society, as was done during the Cultural Revolution in China. By committing murder and other crimes amid the chaos, these people acted as accomplices to the Chinese Communist Party’s savagery, and the most brutal perpetrators became the staunchest followers of the Party. Even today, many former Red Guards who committed assault and murder during the Cultural Revolution express no remorse for the events of their youth.

Furthermore, by killing its victims openly and deliberately, the Communist Party terrorizes the general population into obedience.