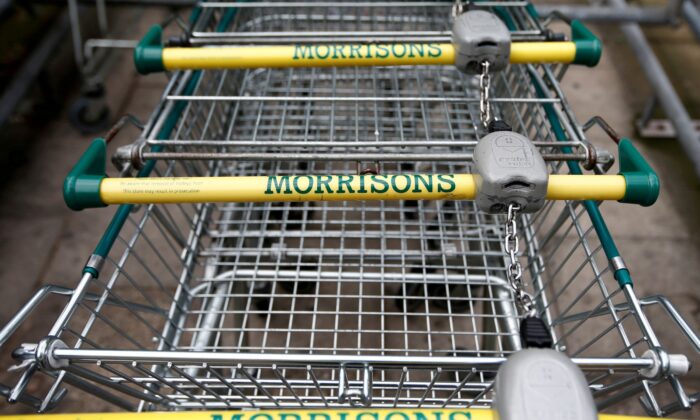 LONDON—British supermarket group Morrisons, at the centre of a bid battle between two U.S. private equity firms, on Thursday reported a 37.1 percent fall in first-half profit, hurt by COVID-19 costs and lost profit in cafes, fuel and food-to-go areas.

The group, which trails market leader Tesco, Sainsbury’s and Asda in annual revenue, maintained its full-year guidance but warned of some industry-wide retail price inflation during the second half, driven by sustained commodity price increases and freight inflation, and the current shortage of HGV drivers.

In a results statement that looks likely to be Bradford, northern England-based Morrisons’ last as a publicly listed company, it reported profit before tax and exceptional items of 105 million pounds ($144.5 million) in the six months to Aug. 1, down from 167 million pounds in the same period last year.

Morrisons, which trades from 497 stores and has a staff of over 110,000, said direct COVID-19 costs were 41 million pounds, while 80 million pounds of profit was lost in cafés, fuel and food-to-go areas because of the pandemic.

Total revenue including fuel was up 3.7 percent to 9.05 billion pounds, with like-for-like sales excluding fuel and VAT sales tax down 0.3 percent.

The slowdown reflects the easing of pandemic restrictions on hospitality, shifting demand away from the eat at home market.

“The whole Morrisons team has shown commendable resilience facing into a variety of continuing challenges during the first half, including the ongoing pandemic, disruption at some of our partner suppliers, and the impact on our supply chain of HGV driver shortages,” said Chairman Andrew Higginson.

Morrisons maintained its guidance for the full 2021–22 year, for profit before tax and exceptionals including business rates paid to be above the 431 million pounds made in 2020–21, excluding 230 million pounds of waived rates relief.

Last month Morrisons, which started out as an egg and butter merchant in 1899, agreed a 7 billion pound offer from Clayton, Dubilier & Rice (CD&R), which has former Tesco boss Terry Leahy as a senior adviser.

However, a rival consortium led by Softbank-owned Fortress Investment Group could still trump CD&R’s bid for the group and the battle looks to be heading for an auction process overseen by the Takeover Panel, which governs M&A deals in the UK.

CD&R’s latest offer is worth 285 pence per Morrisons share—a 60 percent premium to Morrisons’ share price before takeover interest emerged in mid-June. Fortress’ last offer was pitched at 272 pence a share.