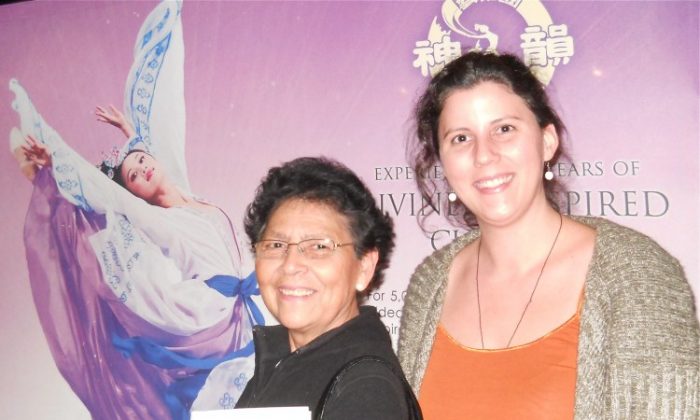 “I thought it was fantastic,” said Mr. Klaehn, a sociology professor at Wilfred Laurier University in Waterloo.

“The second half, I thought, was just awesome. And it went by so fast. Well worth the money. I’ve seen a lot of plays and musicals and this was just astounding.”

Noting that Shen Yun could inspire interest in China’s past and present, Mr. Klaehn said he appreciated that the dances spanned China’s 5,000-year history.

“I thought it was a brilliant and beautiful way to bring Chinese culture to audiences who may not be familiar with it,” he said.

Shen Yun was founded in 2006 on a mission to revive 5,000 years of divinely inspired Chinese culture all but destroyed under 60 years of communist rule. Shen Yun, which is based in New York, has three equally large companies that tour the world each year, with over 100 cities scheduled for 2013.

Each of those companies tours with a unique philharmonic orchestra that features Chinese instruments leading the melodies.

Mr. Klaehn said Shen Yun’s orchestra was “awesome, brilliant,” and that he loved the vocal and musical soloists.

“The music was brilliant. I just loved it,” he said.

An experience to remember for a lifetime

Shen Yun is “an experience I’ll remember, … we all will, for the rest of our lives probably,” Mr. Klaehn added.

With an all-new performance each year, Mr. Klaehn said he would be back to seen Shen Yun next year.

He and his girlfriend, librarian Aleida Struik, drove to Mississauga from Kitchener because it was the only performance that fit in with her mother’s schedule, and she had been wanting to see the show.

“I was really impressed with all the outfits, the colours, the costumes, everything looked so cool from the balcony,” said Ms. Struik.

The couple shared their enjoyment of the digital projection that provides vivid animations for each dance.

“That screen, the effects were outstanding,” said Mr. Klaehn.

Ms. Struik said she was struck by how the animated settings on the backdrop interacted with the dancers on the stage.

“It was just perfect synchronicity with whatever was showing on the screen, and then they would just pop up onto the stage. I’ve never seen that before,” she said.

“The choreography was awesome,” Mr. Klaehn added. “They did a fantastic job.”