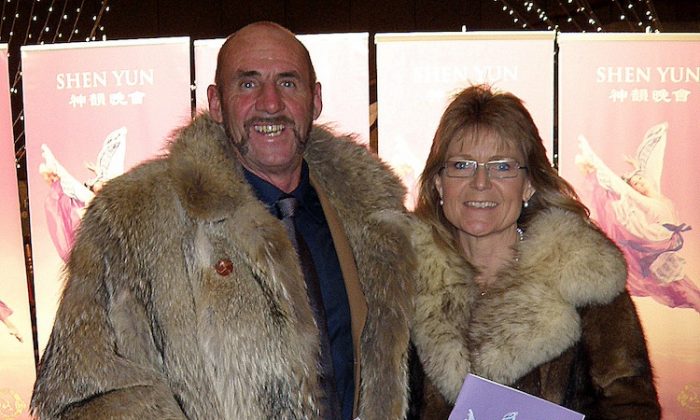 OTTAWA, Canada—Professional photographer Kathy Botham’s partner took her to see Shen Yun Performing Arts at the National Arts Centre on Friday night as a Christmas present, and the couple was so impressed that they will be coming back next year.

“I thought the whole [show] was wonderful, the dancing, the colours,” said Ms. Botham, a photographer for the Lanark County Living news website who also works freelance as a photographer and reporter at Record News/EMC community newspaper.

“I’ve had three days to look forward to this and it was a wonderful, wonderful show,” she said after seeing the renowned classical Chinese dance and music production.

New York-based Shen Yun was founded in 2006 with a mission to revive 5,000 years of traditional Chinese culture. Each year the company tours the globe with an all-new lineup of dances, songs, and musical scores, with a focus on classical Chinese dance but also featuring China’s many ethnic and folk dances.

Noting that traditional Chinese culture and dance are very different from their Western counterparts, the couple both praised the synchronization of the choreography.

“It’s very synchronized,” said her partner, Bill Onion, founder and owner of Sunrise Roofing, a local roofing company that has been in business for over 10 years.

“Because we know very little of the [Chinese] culture, it was very educational,” Mr. Onion added. “That was part of the entertainment.”

The couple was also impressed by Shen Yun’s vivid digital backdrops, which make use of state-of-the-art graphics technology to extend the stage and transport the audience to other worlds.

From ancient gardens to Mongolian grasslands, from dusty battlegrounds to holy temples, from tropical beaches to celestial paradises, the digital projections reflect China’s many legends and stories and its diverse geography, society, regions, and dynasties.

“The people flying in and then the dancers coming up the back—that was great,” said Ms. Botham, referring to the animated backdrops that feature figures descending from heaven and then appearing on stage as their real-life counterparts.

She would definitely recommend Shen Yun to her family and friends, Ms. Botham said.

“I really like the fact that every show is different. Next year we’re going to see it come back again,” she said.

The couple’s daughter, who is dancer, was unable to join them at Shen Yun on Friday night because she was working, but she will certainly join her parents to see the show next year, Ms. Botham said.

“I think we will make it a family affair next time,” Mr. Onion said.