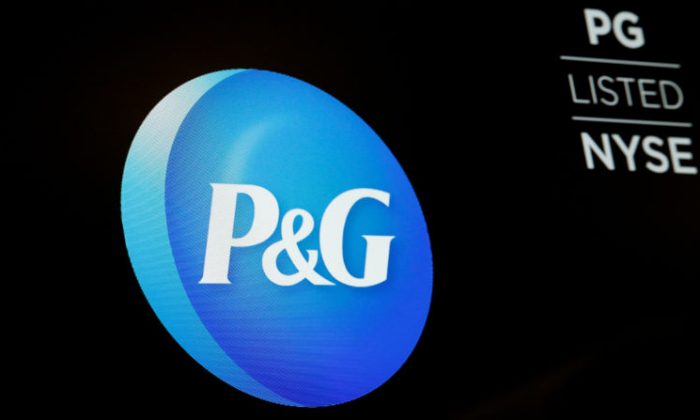 The logo for Procter & Gamble Co. is displayed on a screen on the floor of the New York Stock Exchange (NYSE) in New York, on June 27, 2018. (Brendan McDermid/Reuters)
Companies

Procter & Gamble Co reported first-quarter profit that beat estimates and sales that unexpectedly rose on Oct. 19, thanks to robust demand for its beauty and cleaning products, helping it stave off rivalry from cheaper store-branded products.

Shares in the company, which makes Pampers diapers and Tide detergent, jumped 4.8 percent in premarket trading. The stock has fallen 13 percent this year, underperforming the broader consumer products index.

P&G and its rivals have been rocked this year by surging input costs and the foreign exchange impact of a strong dollar.

Fierce competition between retailers and changing consumer habits have also made it harder for consumer companies to lift sales, forcing them to raise prices in some categories.

P&G’s challenges relating to commodities, transportation, and foreign exchange have increased in the past quarter, Chief Financial Officer Jon Moeller said on a call with journalists.

P&G had told retailers during the quarter that it planned to raise prices on “several products” in U.S. home care, oral care, and personal care, Moeller said.

The company is also raising prices in many developing markets, including Argentina, Turkey, and Russia, to make up for foreign exchange headwinds, he added. The sturdy dollar makes the company’s products more expensive in overseas markets.

“In less than the 3 months since our last earnings release, the foreign exchange headwinds on earnings increased by $400 million after tax,” Moeller said.

In July, P&G said it was rolling out an average 4-percent increase in Pampers diaper prices and an average 5-percent price rise for Bounty and Charmin toilet paper and Puffs tissue products in North America.

Lofty prices may not sit well with U.S. retailers that have been aggressively cutting prices and tightening inventory levels to keep pace with Amazon.com Inc.

Net income attributable to the company rose to $3.20 billion, or $1.22 per share, in the first quarter. Excluding items, the company earned $1.12 per share, beating Wall Street estimates of $1.09 per share, according to data from Refinitiv.

Sales in its fabric and home care division, the company’s biggest unit by sales, grew 2 percent. The unit sells Tide detergent and Febreze air fresheners among other products.

Net sales inched up unexpectedly to $16.69 billion from $16.65 billion. Analysts had forecast overall sales to fall to $16.46 billion.