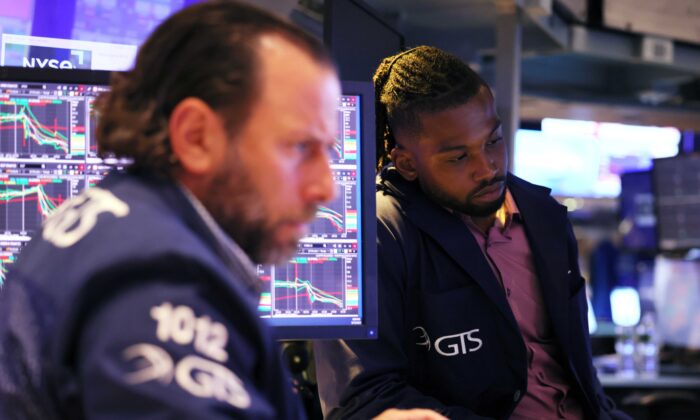 The spin machine on inflation news has been working on overdrive.

The Sept. 13 Consumer Price Index (CPI) release revealed terrible news, which was obvious within seconds of the release. It was a shock, so perhaps it’s understandable that the pressure of deadlines caused major media to downplay how grim it was. First, we were told it was “easing,” a verb obviously refuted by the facts before our eyes.

By noon, it became obvious that the first reports were completely wrong. Financials crashed, with the Dow Jones Industrial Average falling 800 points. Four hours later, the reality was fully processed. This was grim: Inflation isn’t only not going anywhere, it might, in fact, be heating up. The DJIA closed down 1,300 points, the worst day in two years.

It’s a guess that the White House went into meltdown, given the political implications.

Even on Sept. 14 as Wall Street woke up, there was some hope that the news had been just a fluke. The Producer Price Index—which gets far less attention but is probably even more important overall—would surely reveal something wonderful that would prompt the Federal Reserve to call off the dogs of war that currently are ripping credit markets apart.

No such luck. The report from August was worse than the previous month’s report. Most of the reported 0.1 percent decline in final demand for goods was attributable to the decline in the gas price, the benefits of which were easily swallowed by electricity price increases plus everything else. In service, the news was bad across the board: an across-the-board increase of 0.4 percent.

Put it all together and we have a 12-month increase of 8.7 percent. We are already too used to such numbers. A few years ago, this would have been unthinkable. Now, we’ve come to expect it. There’s every reason to believe this trend will persist through next year, further eroding the domestic value of the dollar for everyone. By the end of next week, the pre-lockdown dollar will likely be worth only 70 cents.

In the year following the massive disruption from lockdowns in March 2020, producer prices were increasing much more slowly than consumer prices. This was a merciful gift to enterprise following the hardest 12 months ever seen. At least they didn’t grapple with terrible margins and consumers were more willing to pay higher prices.

That flipped in the other direction in 2021, and business began to suffer terrible cost increases, even as consumers became more sensitive to price changes. This has really put the squeeze on all producers but especially small and medium-sized businesses without ready capital to enable them to ride the storm. Labor costs became especially crushing with the shortages that enable workers to demand high prices for services.

Consumers and producers have already nearly depleted their reserves just to maintain lifestyles and payrolls, and they have started to borrow more than is really sustainable. Just as this trend began, the Fed started its attacks on inflation by raising rates, in an attempt to replicate Paul Volcker’s efforts from 1979–80 that triggered a recession but at least tamed inflation.

There are a number of problems with this scenario. Volcker’s ambition was to put short-term interest rates into positive territory as adjusted for inflation. He did manage to do that with a federal funds rate reaching as high as 22 percent. In all, there were three successive rounds of increases over 15 percent. That’s just a stunning history that is nowhere accomplished or even imagined by the current Fed.

With inflation on consumer and producer goods toggling between 8–9 percent overall, and the federal funds rate at a mere 2.3 percent, consider just how far the Fed has to go before it comes anywhere near doing what Volcker did. Simply put, no one at the Fed is even contemplating such a thing. That means the Fed isn’t going to successfully sop up the liquidity that the central bank dumped like a torrent on the world starting in the spring of 2022.

Very crucially, the difference between now and 1980 is that the current administration has no intention of making dramatic changes that favor enterprise and wealth creation. The final years of the Carter administration and the first year of Reagan saw dramatic and historic deregulation in major industries, plus huge tax cuts for households and businesses. That was a major reason why the inflationary disaster subsided. The administration itself realized that the best means of tackling economic stagflation was economic growth.

That knowledge and wisdom are nowhere present in Washington today. This is why the Fed’s actions today are driving recession but without the hope of a turnaround once markets have cleared. In 1982, the recession felt grim but there was a well-founded hope that prosperity would return with a new focus on economic growth. That proved true: by 1984, it became clear that the new administration had turned malaise into new hope.

The path today is very different: policies are driving the economy to ruin even as inflation seems not to be responding much at all to the Fed’s tightening. It’s a bit like the lockdowns to tackle the virus: causing tremendous damage in every sector sensitive to rate changes while not actually dealing with the problem.

Nor does it inspire confidence that the Biden administration is happy to spin the grim reality as a glorious transition to a new age of renewables and a world without climate change. Far from seeing the inflationary recession as a real problem, they continually assure us that they know exactly what they are doing, things aren’t so bad and are really getting better, and anyone who complains about it is likely a MAGA-supporting enemy of democracy who probably needs to have his or her cell phone examined by the FBI.

There are very serious economic problems in this country that affect the hopes and well-being of every single family and business in America. The Biden administration seems utterly clueless as to what to do about it, and instead has substituted a political war on anyone who has doubts about the wisdom of this administration. If the White House put a fraction of the energy it puts on its political war into actually reading up on economic logic, we would be vastly better off.

As it stands, we’ve got a Fed operating on the idea that the best solution to pain is more of it, a Congress that views all the chaos in this country as an opportunity to vote more largess for their political benefactors, and a White House that is abusing the bureaucracies to target its political enemies.

At least in an age of lies, the Bureau of Economic Statistics is still cranking out the numbers that offer a closer approximation of the truth: This country is being systematically wrecked.