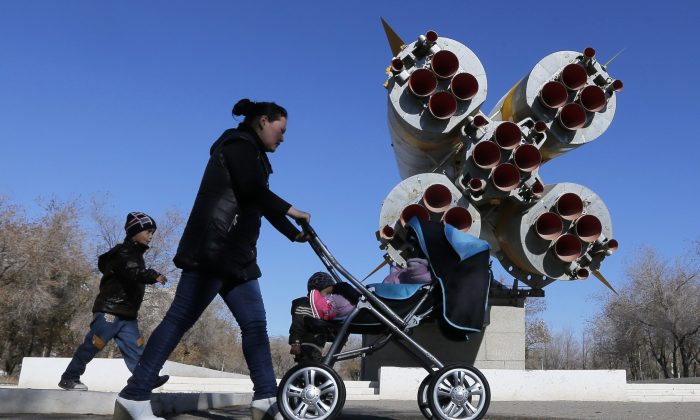 A woman walks with her children past a monument of a Soyuz rocket at the Baikonur cosmodrome in Kazakhstan on Nov. 3, 2013. Two Canadian cameras installed by Russian astronauts at the international space station last week have been removed for safety reasons. (AP Photo/Dmitry Lovetsky)
Canada

UrtheCast Corp. said Monday that the cameras are now being stored inside the ISS until it can be determined why they weren’t receiving any power.

Russian astronauts Oleg Kotov and Sergei Ryazansky installed the two high-resolution cameras without any incident on Dec. 27. But shortly after they were put in place, the Mission Control Centre near Moscow reported that it could not receive any data from either camera.

Without any data, the control centre could not confirm that the cameras were receiving power and would be able to survive “temperature fluctuations” in space, Vancouver-based UrtheCast said in a statement.

“As a consequence, senior technical personnel … jointly decided that the safest and most prudent course of action was to uninstall the cameras and bring them back inside the ISS to be reinstalled at a later date, once the data transmission problem has been solved,” it said Monday.

The cameras—one shoots photos, the other streams video—were expected to begin transmitting high-definition images of the Earth on the Internet early next year. They were installed on the Zvezda service module, the Russian segment of the space station.

Once pointed at Earth, the cameras were expected to be able to show flash mobs, outdoor events, stadiums, boats, and planes, but images like people’s faces and licence plates will be too small to be visible.

They would also be used for agriculture, forestry, and environmental monitoring.

The video camera can take images of an area measuring three by five kilometres. The images were planned to be broadcast on UrtheCast’s website.

UrtheCast said that it will announce a new date to reinstall the cameras in mid-January or earlier.