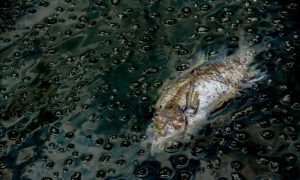 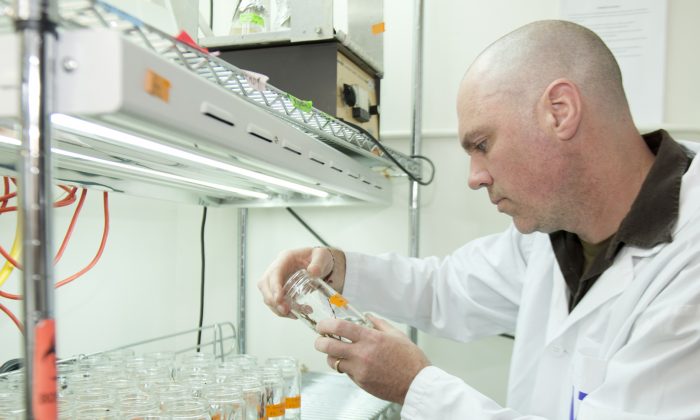 The Doty lab conducts work to see how plants treated with naturally occurring endophytes might handle soils contaminated with a variety of pollutants. Graduate student Robert Tournay, for example, is interested in how the plants handle arsenic. (M Levin/U of Washington)
Environment

Scientists using a microbe that occurs naturally in eastern cottonwood trees have boosted the ability of two other plants – willow and lawn grass – to withstand the withering effects of the nasty industrial pollutant phenanthrene and take up 25 to 40 percent more of the pollutant than untreated plants.

The approach could avoid the regulatory hurdles imposed on transgenic plants – plants with genes inserted from or exchanged with other plant or animal species – that have shown promise in phytoremediation, the process of using plants to remove toxins from contaminated sites, according to Sharon Doty, associate professor of environmental and forestry sciences and corresponding author on a paper about the new work in Environmental Science & Technology.

“Our approach is much like when humans take probiotic pills or eat yogurt with probiotics to supplement the ‘good’ microbes in their guts,” she said.

The microbe from the cottonwood was encouraged to colonize the roots of willows simply by dipping rooted and trimmed cuttings in solutions with the microbe. Grasses were treated with microbes in solution as seeds sprouted in soil. Once integrated into the plants, the microbe supplemented their own microbial defenses.

Microbes that take up residence in the inner tissue of plants and don’t cause negative symptoms are called endophytes. In nature, endophytes have a welcomed, symbiotic relationship with plants. In polluted soil, for instance, if the right endophytes are present they consume toxins coming up through plant roots. The endophytes get fed and the plant gets help neutralizing pollutants that could kill it.

That’s been one challenge of phytoremediation: plants removing pollutants can, all too quickly, succumb to the toxins.

“When the endophyte in these experiments was given to willow and grasses, it reduced the phytotoxic effects of phenanthrene compared to the control plants that did not receive the endophyte and died,” said lead author Zareen Khan, a UW research scientist in environmental and forest sciences.

Phenanthrene is carcinogenic, on the Environmental Protection Agency’s priority pollutants list and belongs to a class of polycyclic aromatic hydrocarbons that get deposited into the environment via fossil fuel combustion, waste incineration or as byproducts of industrial processes. Soils that become contaminated can be capped with layers of uncontaminated soil or dug up and removed for cleaning at soil remediation facilities or storage at waste disposal facilities.

In their search, UW researchers tested six different endophytes from cottonwood and willow varieties and found one – lab name PD1 – from the eastern cottonwood to be superior at breaking down phenanthrene.

They introduced this endophyte into willow cuttings and lawn grass. Willows were chosen because some varieties have already proven adept at removing toxins and the shrubs have extensive root systems, take up a lot of water and grow rapidly. Lawn grass was included because it also grows fast and could be useful in parks and open-space areas.

In lab experiments, the willow cuttings with added endophyte protection continued to grow, kept their leaves and had denser root systems. Untreated plants wilted, lost leaves and their roots turned brown. When soils were analyzed, the treated willows took up 65 percent of the phenanthrene compared with untreated plants that removed 40 percent, an improvement of 25 percent.

Grass seed planted in contaminated soils and watered with solutions containing the PD1 endophyte germinated five days quicker, grew taller and had 100 more tillers, or new offshoots, after 13 days. Treated grass removed 50 percent of the phenanthrene from the soil, compared with untreated grass that removed 10 percent, an improvement of 40 percent.

In phytoremediation, plants that take up pollutants but don’t degrade them have to be removed and treated as hazardous waste or otherwise disposed of safely. The willows treated in the UW experiment appear to have degraded some 90 percent of the phenanthrene to harmless components. The researchers said they’d like to determine if that promising finding holds up in mass-balance studies and want to examine the possible effects on bugs or animals that might bite the plants processing the toxins and other environmental considerations. Interestingly, other studies have shown that bugs can smell similar semi-volatile pollutants and avoid eating the plants containing them, Doty said.

The work was funded by a Small Business Innovation Research grant from the National Institute of Environmental Health Sciences that came through the company Edenspace, and by funds provided through the Byron and Alice Lockwood Endowed Professorship that Doty holds. The other four co-authors on the paper were undergraduate volunteers: David Roman and Trent Kintz have since graduated while May delas Alas and Raymond Yap are still working on their bachelor’s degrees.

Just down the road from UW is Seattle’s Gas Works Park, a site Doty thinks is a prime candidate for the approach her lab reported. Contaminants in the soil, including phenanthrene, are from a now-dismantled gasification plant. Soils have been covered with uncontaminated soil.

“The idea of leaving a known carcinogen in a public place is not right,” she said. “What about problems of erosion? We should do what we can to remove it. We spend so much money treating cancer, I’d like us to take steps to prevent it instead.”