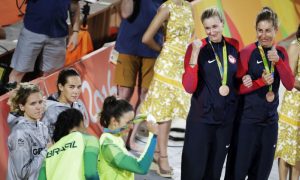 Police identified the man who jumped to his death at Borgata Hotel and Casino in Atlantic City in New Jersey as Eric Zaun, a professional volleyball player.

Zaun, who was 25, was found dead in the parking lot of the hotel. Officials later confirmed that he had jumped from the 29th floor of the hotel room, People magazine reported.

The Association of Volleyball Professionals confirmed Zaun’s death on Instagram.

“The AVP is deeply saddened by the sudden passing of Eric Zaun,” the post said. “Our prayers and thoughts are with his family and friends at this time. He will be deeply missed.”

According to the association’s website, he was named AVP Rookie of the Year in 2017.

He also played for Limestone College as an outside hitter before playing beach volleyball professionally.

According to People magazine, he lived in Florida before moving to Southern California for his career.

“I love the culture and the lifestyle associated with beach volleyball,” Zaun told Volleyballmag.com in 2017. “It’s great to be able to travel around the country to different beaches and locations doing what you love.”

“June is gonna be a good month,” he wrote in the post.

A forum for beach volleyball players issued a statement about his death.

It said, “Grainy nighttime pix of when Eric Zaun came to Aussie’s to practice late night with Avery Drost before AVP Austin last month. There was a buzz when he showed up, and started warming up my himself on Court 2. They proceeded to get heckled by the Wednesday late night Draft League crew taking it all in stride & fun smirk. A few Sand Wannabes to many got to know Eric on different levels at different times from his NVL days to current AVP days, and those interactions from watching him play with so much intensity to casual convos were always memorable. It’s a sad day. If you’re going through stuff/life reach out especially in the sand volleyball world as there are good crews of listeners when needed. RIP Eric :(.”