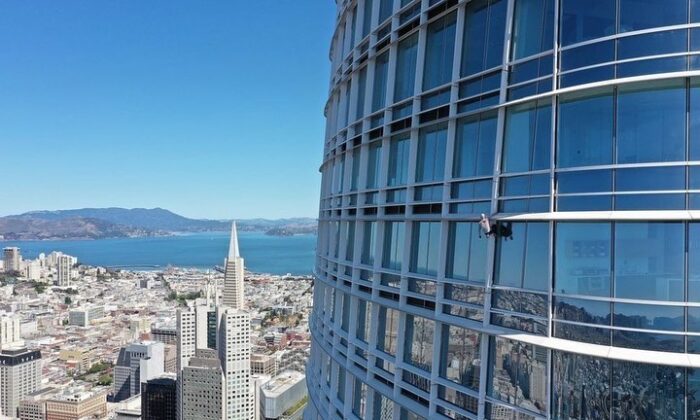 SAN FRANCISCO—Maison Des Champs, or better known as “Pro-Life Spiderman,” is not only a bold free-climber, but also a pro-life activist who surprised onlookers and made headlines after he was spotted on the morning of May 3, climbing up the second tallest building on the West Coast with no equipment.

Then about 48 hours later, the University of Nevada Las Vegas student was in New York City scaling the New York Times building, hanging up two banners that criticized abortion on the way up. On Sunday, he scaled the Renaissance Center in Detroit.

“After the news broke about Dr. Cesare Santangelo, that’s what really sparked all this. I’ve been wanting to climb the Salesforce Tower for a while. I’ve been looking at buildings in New York and what not. But when that happened, I was like, okay they’re not investigating this. That is absolutely insane. If I can do anything I have to do it now,” Des Champs told NTD in an interview.

Dr. Santangelo is a late-term abortion doctor who has been under fire from pro-life groups after a discovery of aborted bodies allegedly from his clinic. They “were so advanced in their gestational age and the patterns of their wounds suggest violent federal crimes,” a spokesperson from one of the groups told The Epoch Times.

“He’s an abortionist in DC, and the DC police refuse to investigate him. Pro-life activists have recovered bodies that appear to be very, very late term if not illegally aborted outside of the womb which is outright murdering babies. We don’t really know because there’s been no investigation,” Des Champs said.

The climber says his main goals are to raise awareness about Dr. Santangelo as well as to raise money for pro-life charity organizations. The timing of his climbs with the leak suggesting the Supreme Court will overturn Roe v. Wade was not planned.

“The morning we were leaving for San Francisco, the news broke about the Roe v. Wade leak. It was crazy how that sorta helped the spread of my message too, and I couldn’t believe it. I was very surprised,” Des Champs said.

The Salesforce Tower in San Francisco is 1,070 feet tall and only 30 feet shy of the Wilshire Grand Center in Los Angeles. However, since Wilshire’s measurement includes a thin spire on the top, Salesforce technically has the highest roof on the West Coast. Besides height, Des Champs says he chose the Salesforce Tower because it has ledges every 10 feet.

“When you’re climbing you want to be able to stop, shake out, or calm yourself if you’re feeling overwhelmed. And I could do that every 10 feet on the Salesforce Tower. So, when I was climbing, I wasn’t thinking that I had to climb a thousand-foot building, and I said all I got to do is climb ten feet at a time,” he said.

One thing he regretted while climbing the San Francisco skyscraper was not bringing any water. But, he enjoyed seeing all the people inside the building while he was climbing.

“It was kind of funny, I could see everyone inside the glass. And so, they were on the inside filming me.”

The police were waiting for him when he arrived at the top.

“Because I broke the law and I used up their resources and I feel bad for that. But they are so defunded they had to debate whether or not it was worth bringing me in.”

Des Champs was eventually taken in and released about two hours later with two misdemeanors: one for trespassing and one for resisting arrest for not complying when police told him to stop climbing.

However, after climbing the skyscraper in New York, he was surprised to be able to escape without incident, the police nowhere in sight. In Detroit, he was again arrested and cited for disorderly conduct.

As far as how his family and the rest of the world feel about his fundraising efforts, he says support is mixed.

“Half of my family is mad. The other half is really cool,” he said.

“I have probably gotten a thousand death threats from people. Like actual death threats. Then you have people who are just like jump, jump off you know. And I just think that’s stupid.”

The climber and activists says he has also received a lot of support from the community. He shares his activity on Instagram and also especially enjoys reading the comments on his charity GoFundMe page.