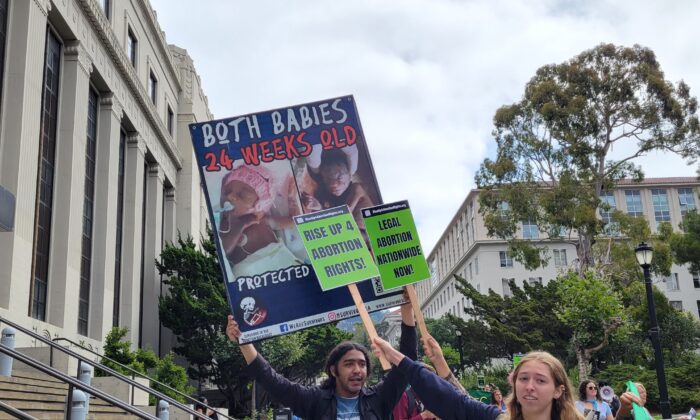 Robert Byrd of Pro-Life San Francisco holds up a sign while Rise Up 4 Abortion Rights counter-protesters block part of it at University of California Berkeley on Aug. 26, 2022. (Jason Blair/The Epoch Times)
Northern California

Pro-Life, Pro-Choice Groups Face Off at California College Over Proposition 1

Opposers of a new abortion-related bill squared off with counter-protesters at the University of California Berkeley campus on Aug. 26.

“It will allow up until the moment of birth electively, which means even 24 hours before your due date you could just choose to get an abortion,” Anastasia Rogers told NTD, a sister media of The Epoch Times. Rogers is a volunteer organizer for Pro-Life San Francisco.

Currently, abortion in California is legal electively up until viability, which is about 24 weeks into a pregnancy.

Opponents of the bill have said that people are being misled by vague language that some proponents are using, and that most Californians will vote the bill down when they realize what it does.

“Whether or not you’re pro-choice or pro-life, we shouldn’t be supporting elective third trimester abortion. Most people don’t support that, and the California legislator and the people who are in office are trying to misinform people about what it is. They’re using vague language and not telling people what Proposition 1 actually does,” Kristin Turner, executive director of Pro-Life San Francisco, told NTD.

Pro-abortion group Rise Up 4 Abortion Rights was on campus to counter-protest.

“We’re for legal abortion, nationwide, now, without restrictions. End of story,” Magda Choliwinska, organizer with Rise Up 4 Abortion Rights, told NTD while a group of their protesters were gathered on the sidewalk behind her.

“This is a human rights issue. We need to be able to decide for our own. If I have a child and there’s no skull, should I really be forced in that moment to have to bring that pregnancy to term? No, absolutely not. I wouldn’t wish that on anyone,” Rise Up 4 Abortion Rights emcee Jamie Burton told NTD.

Maison Des Champs, also known as Pro-Life Spider-Man, was there in opposition of Prop 1.

“Proposition 1 is a bill from hell, and we need to keep fighting and informing the people of California so that it doesn’t make it past the ballot. Spreading the pro-life message at a place like Berkeley is like being inside of the belly of the beast. It’s a hard thing to do, but it’s so important if we want to stop this bill,” Des Champs told The Epoch Times.

Des Champs, a former resident of California, came over to the San Francisco Bay Area from Las Vegas to support Pro-Life San Francisco in a series of planned demonstrations called “Week of Action.”

Earlier in the day, Des Champs climbed UC Berkeley’s Sather Gate and hung up a “No on Prop 1” sign.

“It ticked some pro-abortion protesters off, and eventually someone got the guts to cut it down,” Des Champs said.

Des Champs made headlines earlier this year when he climbed Salesforce Tower in San Francisco and the New York Times building in New York City in protest of late-term abortion doctor Cesare Santangelo. He is currently working with Let Them Live, a pro-life charity that raises money for mothers in need who choose not to have abortions.

Pro-Life San Francisco is one of the only pro-life voices in a largely pro-choice city. They describe themselves as a multi-partisan, non-sectarian human rights group. Members have a mixture of backgrounds and include feminists, progressives, Christians, and vegans.

“It boils down to science for me. It’s not religious; it’s not any of that. It’s about human rights. It’s about the scientific fact that human life begins at conception. I actually have a biology degree, so that’s where I’m coming from education-wise. Any embryology textbook will tell you that life begins at conception,” Rogers said after marching down a Berkeley sidewalk with other opponents of Prop 1.

Although there were a few verbal spats here and there, overall both groups kept things relatively civil.