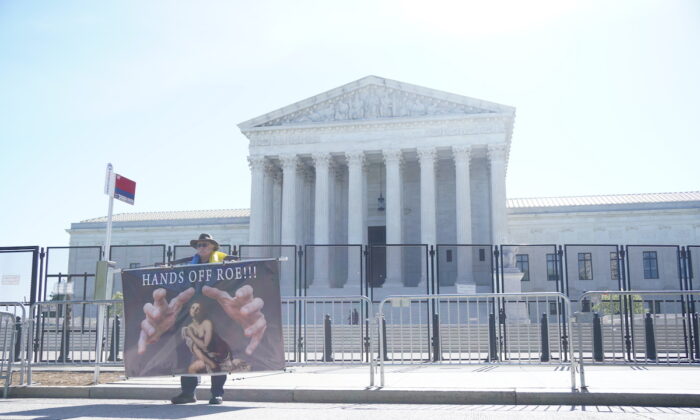 A double layer of barricades surrounds the U.S. Supreme Court in Washington on May 10, 2022 (Jackson Elliott/The Epoch Times)
Judiciary

WASHINGTON—Pro-life advocates are expressing shock at reports of abortion activists leading an aggressive campaign of protests outside the homes of Supreme Court justices in response to a leaked draft opinion that suggests the high court plans to overturn the 1973 Roe v. Wade decision.

While picketing to influence a judge’s ability to discharge his duty is a crime under U.S. law, the pro-abortion group Ruth Sent Us has an online announcement calling for protests on May 11 outside the homes of Supreme Court justices.

The government’s minimal action in response to the protests shows that important leaders support abortion, according to American Life League President Judie Brown.

“This is the entire system gone mad,” she said. “They’re all in favor of abortion—the government, et cetera. And now is the perfect chance to show how they really feel.”

It’s not the fault of the police that only a few officers stood outside the homes of Supreme Court justices over the past few days, Brown said. Higher government officials have kept the police from deploying in force.

“If I were a policeman, and I saw this kind of violence going on, especially at the residences of Supreme Court justices, I would send a clear message that this is not going to be tolerated by the police department,” she said.

So far, hundreds of protesters have gathered to shout outside the homes of Justices Brett Kavanaugh and Samuel Alito, and Chief Justice John Roberts. More protests are planned for May 11, according to a website run by Ruth Sent Us.

As of press time, the Department of Justice has remained silent about whether the protests outside the Supreme Court justices’ houses are illegal. Attorney General Merrick Garland has made no comment.

So far, the protests outside the Supreme Court have been loud and angry, with several punches thrown at pro-life protesters.

“Abortion is a violent act,” Brown said. “And the people who support abortion are violent.”

Bryan Kemper, the director of youth outreach for Priests for Life, says he was punched by protesters while he was outside the Supreme Court.

“I was punched several times,” he said. “Friends of mine were punched and attacked. What we’re seeing is unhinged.”

Kemper said he wouldn’t be surprised if violence continued outside the homes of the justices.

Ruth Sent Us, one of the groups organizing the protests outside the homes of justices, asks people to let them know if they want to join or lead a “peaceful protest.”

Despite their concerns about violence by demonstrators, both Brown and Kemper said they don’t think the Supreme Court justices will be intimidated by the protests.

In response to the protests outside the houses of the Supreme Court justices, government reactions have been mixed.

White House press secretary Jen Psaki, in a shift from the initial response to the protests, said that judges shouldn’t have to worry about their personal safety.

“Judges perform an incredibly important function in our society, and they must be able to do their jobs without concern for their personal safety,” she announced on Twitter.

“Virginia State Police were closely monitoring, fully coordinated with Fairfax County and near the protests,” he said.

“The Supreme Court leak will set a disturbing precedent of inciting mob pressure to intimidate the justices before they issue a decision,” he said on Twitter. “For the sake of the court’s independence, this leaker must be found and punished.”