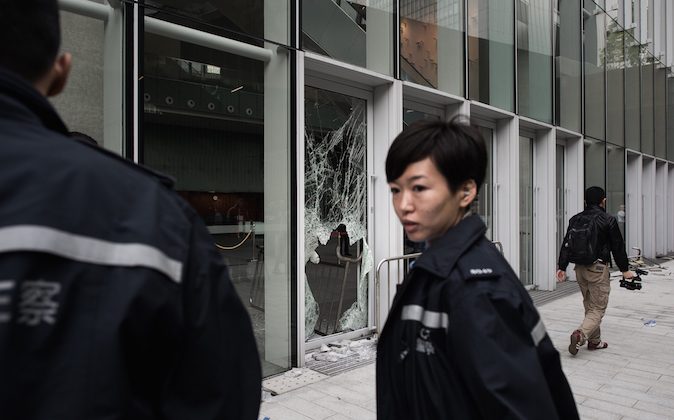 A policewoman stands by a broken window of the government headquarters building in the Admiralty district of Hong Kong on November 19, 2014. (Philippe LopezAFP/Getty Images)
China

Unidentified protesters who stormed Hong Kong’s Legislative Council building and broke a glass door have been criticized by legislators, the government, and student groups.

At about 1:00 a.m. Hong Kong time (12:00 a.m. Eastern time) on Wednesday, Nov. 18, a small group of masked protesters used a metal barricade and other implements to repeatedly ram and shatter a glass door of the LegCo building in Admiralty.

The masked protesters were responding to a misleading post on HKGolden, a popular Hong Kong online forum, that asked people to break into LegCo to protest the voting of Article 23 for the Internet in a legislative session later that day. The bill, which would curb online freedom, will only be tabled next year.

Shortly after the incident, police showed up in riot gear, and kept the radical protesters away from the building with batons and pepper spray. The police, who were criticized for their brutality in clearing protesters from Causeway Bay and Mong Kok in the early weeks of the demonstrations, were relatively restrained in the numerous scuffles that broke out.

Police “strongly condemned the violent radicals for storming and damaging the LegCo Complex” in a statement, and revealed that a total of six people have been arrested for this incident, and that further arrests may be made.

The Hong Kong government also condemned the attack and described the incident as “an act by rioters,” RTHK reports. Both the government and the police have not directly blamed the pro-democracy protesters for the break-in.

Legislators who have spoken up are critical of the culprits and share the opinion that the Occupy movement should not be held responsible for their actions.

According to RTHK, Jasper Tsang, president of the Legislative Council, said that LegCo will not use the break-in as a reason to clear the protesters outside the LegCo building, and believes that the culprits are not Occupy demonstrators.

Also, Albert Chan of People Power party said that the “organizers should explain their action to the public, or they will be deemed cowards for not assuming responsibility.”

Other pan-democratic legislators likewise criticized the masked protesters, and stressed that Occupy movement has thus far been peaceful and nonviolent for the past fifty-three days.

“This is a very, very isolated incident,” said Labour Party legislator Fernando Cheung, as quoted by Reuters. “I think it’s very unfortunate and this is something we don’t want to see happen because the movement so far has been very peaceful.”

Cheung was at the scene when the masked protesters tried to smash the glass door, but failed to dissuade them.

Occupy Central with Love and Peace, one of the leading pro-democracy groups in the Occupy movement, said in a statement that they condemn the LegCo break-in because the organizers failed to make their intentions known to on-site occupiers beforehand, spread false information, and ultimately went against the Umbrella Movement’s principle of “non-violent civil disobedience and the acceptance of legal responsibility.”

OCLP added that their legal support team will not help those involved in the “forceful charging action.”

Perhaps the most intriguing response comes from Hong Kong Federation of Students (HKFS) and Scholarism.

Although both prominent student groups brought up similar points to OCLP in their official statements, they were more measured and accommodating in their tone, and refrained from condemning the break-in outright. Instead, they held the Hong Kong government accountable for the break-in.

“The incident is the result of the government ignoring public opinion,” the HKFS statement reads. “We urge the government: Stop turning a blind eye to the Hong Kong people’s demands for true universal suffrage.”

Joshua Wong, the convener of Scholarism, told reporters after the incident died down at dawn that “the Hong Kong government has to take responsibility for all actions to date.”

Neither Wong nor the HKFS student leaders were present when the events unfolded.