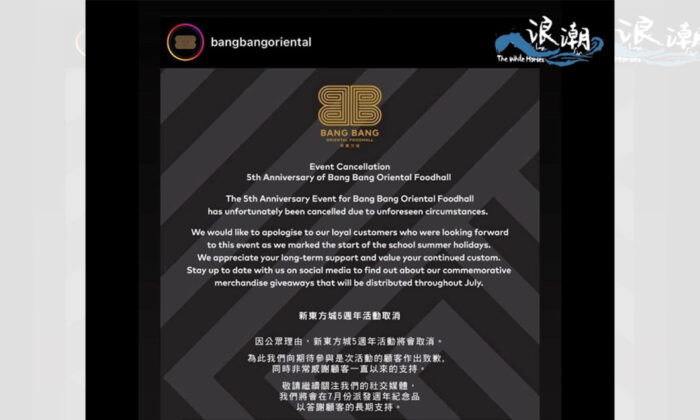 On July 1, 2022, after the news went viral on social media, BANG BANG announced to cancel a celebratory event which was scheduled on July 21, 2022. (Photo of The White Horses)
HK Current Affairs

Owners finally canceled the ‘celebration’ due to backlash
By Nie Law

BANG BANG Oriental Foodhall, a food court owned by Hong Kong restaurateurs in North London, received backlash recently after the restaurant group announced in early July that it would hold its fifth-anniversary celebratory event on July 21.

The incident was greeted with surprise within the Hongkongers community in the United Kingdom, as July 21 is a sad day for many Hongkongers. Netizens’ suspicion was justified when it was later found that the food hall owners turned out to be related to Heung Yee Kuk NT (HYKNT), a powerful pro-establishment advisory body for rural villages and towns in the Hong Kong New Territories. The exposure of this information eventually led to the cancellation of the planned celebration.

Based on the information shared by a UK-Hongkonger group (The White Horses), the BANG BANG Oriental Foodhall in the north London Borough of Barnet opened its doors on July 10, 2017.

The White Horses were confused: why would the food court choose July 21, a rather sad day for Hongkongers, to “celebrate” their anniversary?

The fact that the event was planned to be held on July 21 raised a lot of suspicions.

The Hongkonger group and its followers began to wonder if the restaurant owners had any “ill intention toward Hongkongers.”

After further investigation, Hongkongers online uncovered the close relationships between the food court owners and HYKNT.

July 21 is a yearly reminder of one of the most excruciating memories during the 2019 anti-extradition movement.

On July 21, 2019, over 500 men dressed in white ran inside the Yuen Long MTR station, armed with weapons such as bamboo sticks and pipes. The group, linked to Heung Yee Kuk, indiscriminately attacked passengers in the station.

No one anticipated the attack. Some people returned home after attending an assembly on Hong Kong Island that day. The triads in white were hitting every passenger they saw with their weapons. Many people were injured, including journalists, a LegCo councilor, and a pregnant woman. Millions of Hongkongers saw one of the terrifying events on a live stream. Many people did not understand why the group of men would beat up unarmed and innocent civilians.

Who was Responsible for the 721 Attack?

After the attack, local news agencies reported that the triad members in white shirts were called by an official of the Hong Kong Liaison Office. In leaked video footage, the official asked HYKNT members to drive out any protesters who would show up in Yuen Long that night.

Junius Ho Kwan-yiu, a member of the Legislative Council (LegCo), was recorded shaking hands with the attackers that evening. Ho is known for his Pro-CCP stance and connection with local triads.

In the video, Ho thanked and praised the white-clad attackers for “a job well done.” That same week, local triad members vandalized the grave site of Ho’s parents, as he failed to pay them in full for the job they did on July 21, 2019.

In the 721 Yuen Long Attack, civilians trapped in the MTR station called the police dozens of times. The police never responded. They shut their doors on the innocent citizens and hung up on anyone who called for help that night.

In a press conference, the media asked whether the Hong Kong Police Force had orchestrated the attack with the local gangsters. Although the police spokesperson denied the allegation, the press caught the police being friendly with men in white outside the HYKNT office in Yuen Long.

The White Horses’ followers believed that anyone who would celebrate such a traumatized day would be someone involved in the attack.

The White Horses mentioned that Dynasty Group operates BANG BANG Oriental Foodhall. The owner of the group, Lam Du-ming, once served on the Overseas Advisory Committee of HYKNT. Lam is also a current member of the Heung Yee Kuk London Office.

The White Horses called Lam “a thug for the Hong Kong government and the CCP, who always stands against Hongkongers.”

Besides the food court, The White Horses also listed several dim-sum restaurants in which the Dynasty Group operates.

After the news went viral on social media, BANG BANG announced to cancel the scheduled event. They stated the “reason to cancel” was they had other public engagements on the said day, July 21, 2022.

The White Horses group’s organizer said the group never intended to play “detectives.” However, they thought Hongkongers in the UK should know how bad CCP infiltration is. The group wanted to warn others to stay alert and away from the powerful influence the CCP has overseas.