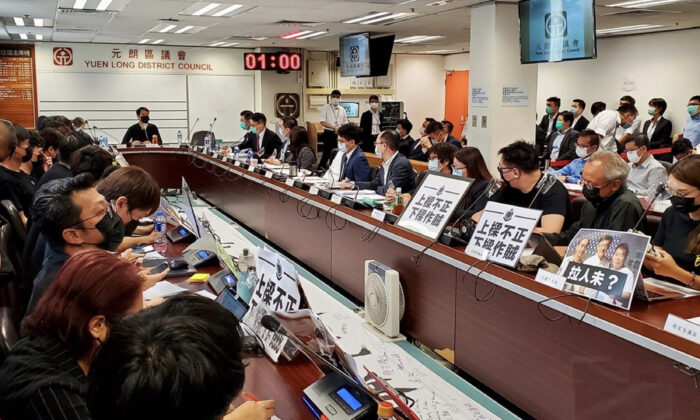 The current term of the District Council of Hong Kong is due to end on Dec. 31, 2023. The Hong Kong government (HKgov) has hinted several times that a revamp of the Council might be on the way.

The Democratic Party and Hong Kong Association for Democracy and People’s Livelihood (ADPL) said that such changes were unnecessary.

Former District Councilors said that the existing District Council has already been annulled. They expect there will be an autocracy in the next Council and that “democratic speech” will no longer exist.

Based on previous practise, the next District Council election will be held in late November 2023.

On July 6, Hong Kong’s Chief Executive (CE) John Lee Ka-chiu attended the Q & A session of the Legislative Council (LegCo) for the first time. Andrew Lam, a LegCo member of the Election Committee Constituency, asked, “What are the exact plans and schedules for the reformation of the region administration?”

Lee answered, “There must be a plan and decision made prior to the next election of the District Council, should there be one.”

LegCo member Alice Mak, disclosed in an interview with Now TV News on Aug. 27, that the administration is under review. However, she said the constituents of the District Council and the means of appointing its members have yet to be decided.

Mak said that under the principle of “Patriots governing Hong Kong,”  expectations are that patriots would be the constituents of any regional administration.

Dominic Lee, from the New People’s Party, proposed that members of the Area Committee, Fight Crime Committee, and Fire Safety Committee should vote for each other to form the District Council. “Professionals, non-government organizations, and school principals should also be appointed to help make the Council more dynamic and professional,” Lee said.

The Democratic Party, however, had the opposite view when addressing the Policy. They urged HKGov to retain the current electoral system and stressed the importance of a democratic election that allows citizens to express their opinions.

Chairman of The Party, Lo Kin-hei, said, “Direct election is the most effective way to monitor and counteract the government. ‘One person one vote’ means citizens can decide who they want as their representatives and voice their needs to the government.”

In an interview, Kwok said the Electoral Affairs Commission has restricted the criteria for dissenter candidacy and disqualified them for political reasons in recent years.

He said, “Pro-democratic councilors have already been disqualified due to the enforcement of oath-taking in 2021. The District Council no longer has diversified voices.”

Kwok also said The District Council’s influence is limited as the Council has only a consultative nature under the regional administrative system.

If the government officials do not listen to the directly elected councilors, the Council is worthless.

Rick Hui, former Shatin District Councilor said, “There is no democratic party in the Council.”

Hui said if the seats for directly elected members of District Councils are reduced to 20 percent, the Councils cannot represent citizens’ interests. The Council will only become a government mouthpiece instead of a public voice.

He added, “LegCo and District Council are merely decorative under the regime. All elections are fake, just like in North Korea. Only those with authoritarian powers stay on the Councils. Therefore, the existence of District Councils is no longer relevant.”

Ben Lam, a former member of the Fire Safety Committee and a former Councilor of Yau Tsim Mong, said, “District Councils are dead.”

Lam said that Regina Ip’s proposal to reduce the number of directly elected seats revealed that John Lee would most likely make a similar announcement in the Policy Address, which includes reducing seats and appointing pro-Beijing parties into the Council. He described the current Councilors as ‘vegetables’ when the Councils are officially certified for the next term.

Lam said that by planting pro-government members, taxpayers are basically paying the “blue ribbons” (pro-government people) to praise the Chinese Communist Party in the local communities.

During the anti-Extradition Bill Movement in 2019, pan-dem and the anti-Beijing camps won by a landslide in the District Council Election. They took home a total of 388 seats and dominated 17 districts.

However, with the disqualification and resignation of pro-dem councilors after the oath-taking in 2021, and sending most democratic figures to jail due to the national security law, 333 democratic party seats have been vacated to date.