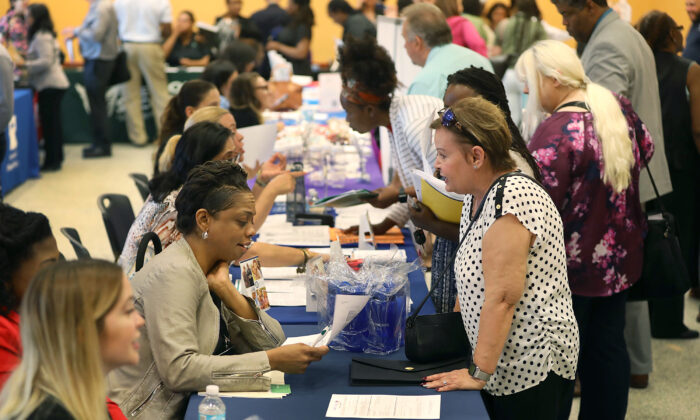 People attend a job fair put on by Miami-Dade County and other sponsors in Miami, Fla., on April 5, 2019. (Joe Raedle/Getty Images)
Economy

Private sector employment in the United States rose by a forecast-beating 534,000 jobs in November, according to the Automatic Data Processing (ADP) Research Institute, with the solid number coming despite one of the worst worker shortages in decades and rising inflation.

The numbers however, show a small decline from October, when companies added 571,000 new positions.

The service sector led the way in terms of job gains with 424,000 new hires in November.

The leisure and hospitality industry, which was the hit hardest by the pandemic, accounted for the bulk of those gains, adding 136,000 new positions.

The industry is gradually hiring workers as vaccination rates have increased, business restrictions have eased; and more Americans begin to travel, shop, and eat out.

Other service sector employers have made gains, with franchises at 35,300 hires, followed by professional and business services at 110,000 new jobs.

“Service providers, which are more vulnerable to the pandemic, have dominated job gains this year.”

The so-called new Omicron variant, which has yet to hit the United States, is concerning health officials and economists about its potential impact.

“It’s too early to tell if the Omicron variant could potentially slow the jobs recovery in coming months,” Richardson said.

“That said, we do expect payroll growth to ease back soon as, regardless of what happens with the Omicron coronavirus variant, rising Delta infection rates in the Northeast and Midwest begin to weigh on demand a little,” Ashworth said.

The Omicron variant from Southern Africa is already making an economic impact overseas. Travel bans have been imposed on the region in the United States, Hong Kong, Israel, and parts of the European Union after the virus was discovered there.

The ADP release precedes the closely awaited Labor Department jobs report, which will release its November report on Friday.

Many economists expect the report to show around 550,000 new jobs, while the unemployment rate is expected to edge down to 4.5 percent.