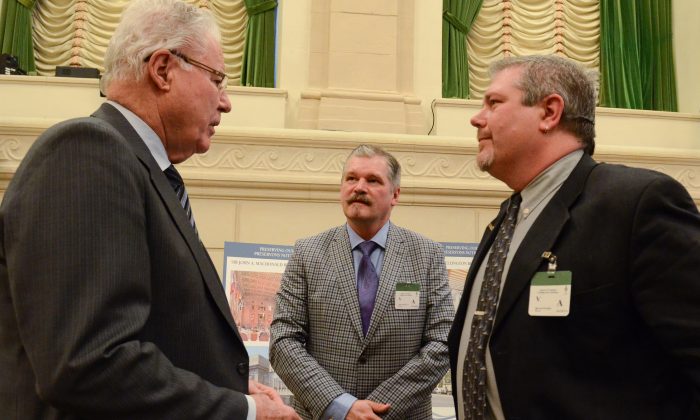 OTTAWA—Trust but verify. It was U.S. President Ronald Reagan’s creed in dealing with the Soviet Union, but is oddly similar to how Canadians treat their charities and non-profits.

Canada relies on these non-governmental organizations to provide everything from music festivals to job training and food banks. But the country is changing and the models NGOs have used for decades are starting to break down.

People are not content to just give anymore. They want proven, long-term results. So do funding partners. Meanwhile, more charities are asking for donations and creating an epidemic of donor fatigue. Austerity measures also means less money comes from the government.

The challenges we face as a society need a new approach.
— Tim Jackson, MaRS Discovery District

“In simple terms, the challenges we face as a society need a new approach,” Tim Jackson an executive VP with MaRS Discovery District, told the human resources and social development committee in February.

The committee is studying “social financing” and how Canada could get some of the millions or billions of dollars currently invested in stock markets to be put towards social programs.

It’s an effort well underway in the United Kingdom, and could work here if NGOs can better measure their impacts and existing laws weren’t quite so restrictive, say experts. Parliament is looking at what needs to be done to make it all possible.

At the moment, charities and others are feeling the pinch, groups testifying before the committee explained.

“The system we have collectively built to deliver social services in this country was designed for a time that has long since passed,” Carole Gagnon, VP of community services with United Way Ottawa, told the committee on March 24.

NGOs now need to change lives and prove it with numbers, said Bill Crawford, executive director of the Eden Community Food Bank in Mississauga. “It is the thing—the thing.”

That means tracking clients over the long term and finding ways to quantify things like whether a person works more, spends less time in jail, or is healthier thanks to whatever the NGO did.

The upside is that building programs based on measurable outcomes puts charities and non-profits on track for whole new sources of funding—social finance.

The U.K. has been leading the way on a new approach to how governments, NGOs, and businesses work to solve problems like unemployment, homelessness, and poverty. It’s part of Prime Minister David Cameron’s “big society” ideology—a revamp of Conservative thinking on social development.

To oversimplify social finance, it comes down to applying business methodology to charitable activities in a way that makes it possible for private money to get involved in social programs.

Gagnon told the committee that having charities, government, and businesses work together offers promising solutions.

“We make the greatest progress when we are aligned,” she said.

Social enterprises—businesses created to help people or the environment—are one option. An example is Eva’s Phoenix Print Shop in Toronto, which employs and trains at-risk youth through its business of providing printing services to companies like Toronto Hydro and Bombardier.

But new models are emerging and Britain is testing them out, with the U.S. close behind. One of the more interesting and controversial is the social impact bond (SIB).

These bonds are bought by private funders like banks and pay for an NGO to do something the government wants done, like increase youth employment.

If the charity can do that job better and more cheaply than existing programs and meet a specific outcome set by the government, then the government pays the charity for the work it did. That money goes to the social impact bondholders, who then make a profit on their investment.

If the NGO doesn’t meet the criteria, the government doesn’t pay and the bondholders lose money.

The first SIB was issued in the U.K. in 2010 and will pay out depending on how well an organization can keep inmates from re-offending. Early results were good but not good enough for a first payout.

The benefit of SIBs is they make it possible for private dollars to fund social programs with measurable outcomes. But there are some sharp criticisms of the model, and some significant challenges, including setting realistic outcomes and finding ways to measure them.

Most fundamentally, there is a fear the government could use SIBs to replace grants or get out of delivering some social programs altogether.

“While the intentions are good, the fear is that in practice it will become another way to privatize public services,” Andrew McNeill with the National Union of Public and General Employees (NUPGE) told the committee on March 12.

McNeill also said that SIBs could increase the cost of programs due to the profit requirement of investors and their interest yields from the bond.
If funding is contingent on outcomes, there is also a possibility that groups could focus on easier problems and people who are easier to help.

“The first priority for social impact bond projects has to be making a profit,” McNeill said, adding that he was concerned profitability would decide who got help.

Social financing paves the way for private companies to profit from public services, Margot Young, a senior research officer with the Canadian Union of Public Employees, told the committee at the same hearing.

“In a way, Goldman Sachs and the consulting companies have, I think, finally found a formula for making a profit out of public services.” she said.

But Gagnon told the committee she did not share the NUPGE’s concerns.

“The whole notion that the private sector money is bad money to invest in a social service sector is flawed to be honest with you, because for years United Way has really relied on private contributions,” she said.

At the moment, even for companies or foundations that want to invest in social enterprise or make “impact investments” aimed at helping communities or causes, it can be difficult.

Strict restrictions on charities and foundations make it risky or impossible to try to achieve their aims using models that are too business-like or stray too far from their narrowly defined missions.

For example, charities cannot target their efforts toward specific private individuals. So a job training program that used the hiring criteria of a specific company for this objective would run afoul of existing laws.

Businesses run by charities must also be largely volunteer-driven and must work tightly within the mandate of the charity. Overreaching puts their charitable status at risk.

One solution is to make some of that work tax-exempt and some subject to income tax to avoid concerns about unfair advantage, Sarah Doyle, also with MaRS Discovery District, told the committee.

MaRS recommended changes that would allow foundations, which hold $45.5 billion in assets under their management, to invest more easily in social enterprises. Foundations currently give out grants which total approximately 3.5 percent of those assets from annual interest. Social financing opens another avenue for them to invest while also achieving social aims.

Ian Bird, CEO of Community Foundations of Canada, said social impact investing gives charitable foundations a place other than the stock market to put their money. The foundations in his group have assets of $3.35 billion, and each year hand out grants from interest collected on that worth $143 million.

Foundations in Bird’s group were created by people who know their communities and what they need, he explained. They want to make an impact and do so by giving grants that fund community programs and capital projects like food banks and education programs.

“When it comes to investing around those same purposes—which we all want to do across the 191 community foundations, with that $4.3 billion in capital that we want to invest in our communities—that is really hard.”

He noted the irony given how easy it was to invest in markets.

“It’s crazy for us. Here we are, we’re community people, we’ve assembled our capital, we want to put it to good use. We’d love to make a loan to the women’s shelter or to a fund that’s all about funding women’s shelters, and it’s really difficult to pull that off. We should change that. It’s just as simple as that,” he said.

“Do the things you need to do to change that.”