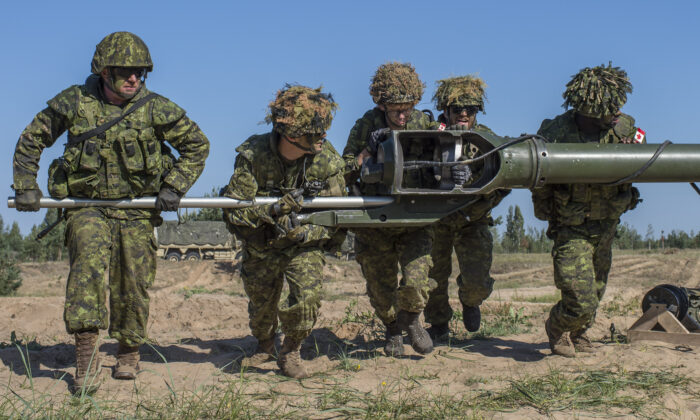 Canada benefits immensely from the protection of the United States, which is asking it, in no uncertain terms, to spend more on national defence and security.

Two of Canada’s major priorities include fixing its military procurement processes and upgrading North American Air Defence Command (Norad). As a country that relies heavily on military alliances, these would, in turn, make Canada a stronger partner for its allies—especially the United States.

Former vice-chief of defence staff Guy R. Thibault, a retired lieutenant-general, says that Canadians greatly appreciate their armed forces and their involvement in the world as peacekeepers. Canadians want their armed forces to be well equipped to carry out their missions, but when it comes to where they think the government should rank defence spending among other priorities, “We’re somewhere down [around the level of] the national ballet or the arts,” Thibault said in an interview.

National defence and security typically aren’t in the public consciousness unless an event like the Afghanistan mission, 9/11, or the Persian Gulf War in 1990–91 is at hand. Canadians generally don’t appreciate why they need to spend on defence given the relative security they enjoy due to geography.

An Ipsos poll published on Dec. 3 suggested that Canadians’ support for the North Atlantic Treaty Organization (NATO) is the third-highest out of 11 key member states surveyed—55 percent of Canadians are in favour of the alliance. But this was hardly evident during the federal election campaigns in the fall.

“During the elections, the subject of national defence was swept under the carpet. This was a missed opportunity to have frank and honest conversation that could generate consensus on the way forward across party lines,” said the Conference of Defence Associations (CDA) Institute in an Oct. 28 statement.

Canada currently spends an estimated 1.31 percent of GDP and has a fleet of aging equipment. There are plenty of holes to plug with additional funds.

The aging North American air defence system and the unique Canada-U.S. bilateral relationship will require Canada to pony up.

“There is no money set aside for the modernization of Norad, and I think this is one of the big areas that they [the government] need to get a grip on,” Thibault said. “The systems that we have for North American air defence are largely becoming obsolete and need to be completely upgraded.”

Other challenges not strictly related to National Defence include cyber threats, which is becoming a bigger concern for NATO. National Defence also has to compete for funding with agencies like CSIS and the RCMP.

When money for emergencies is needed, National Defence tends to be the victim, as it’s the largest discretionary expense in the federal budget.

But aside from budgetary challenges, a major cause of Canada’s inefficient defence spending is a broken procurement system, in which politics, bureaucracy, and excessive oversight are delaying getting the tools Canada’s military personnel need to do their jobs properly.

A spokesperson from National Defence confirmed to The Epoch Times that under the “Strong, Secure, Engaged” defence policy released in June 2017, 68 percent of capital projects are either complete or in some stage of implementation.

However, Thibault is dissatisfied with the current paradigm for major capital programs.

Canada’s attempt to purchase jet fighters sticks out like a sore thumb as a procurement foible. The program to replace aging jets has been ongoing for over a decade and is still many years from completion.

“I think governments need to look themselves in the mirror,” Thibault said. “Shame on those who have been playing with these kinds of programs and not gotten good value for the money.”

Thibault says Canada can learn from the French, the Brits, and the Australians, who are more efficient with their procurement policies.

Except for not meeting the 2 percent of GDP target for spending, Canada has a solid reputation within NATO, as it’s never failed to answer the call.

“The truth is we’re one of the strongest first countries to commit forces,” Thibault said. “We are a major contributor to all of that which NATO is all about. We’re seen as being a trusted reliable partner with other countries.”

NATO is Canada’s most important multilateral force multiplier, says Christian Leuprecht, a political science professor at the Royal Military College of Canada, with a cross-appointment to the Department of Political Studies and the School of Policy Studies at Queen’s University.

“Without the alliance, Canada would be a medium-sized country in the middle of nowhere with relatively little ability to assert its interests around the world,” Leuprecht said in an interview.

He adds that Taiwan might be a good comparison for what Canada’s situation would be like—minus an extremely large, belligerent neighbour.

“Canada is a pretty well-liked flavour within NATO because they can be relied upon. People know they’re going to participate,” Leuprecht said.

Leuprecht’s American contacts joke that the Canadian armed forces are their favourite foreign policy tool, as they can go places where Americans are less welcome.

Canada leads a NATO battle group in Latvia, helping to enhance NATO’s presence in Central and Eastern Europe, and it is supporting policing in Ukraine and Iraq, among other missions around the world.

“The only way we can guarantee our sovereignty is through alliances and partnerships,” Thibault said. “That’s why Canada is so committed to the international rule of law and to our security cooperation with other countries.”

Upgraded equipment will add more gravitas to Canada’s participation alongside its allies.

Canadian governments have always wanted to make sure they get a good bang for the buck with defence spending given the magnitude of the funding. Such investments should create jobs and generate growth in other sectors—a multiplier effect of sorts.

“It’s not always just about buying ships, planes, tanks. It’s about making sure that with Canada’s spending in these areas that we’re actually encouraging other features to these investments,” Thibault said.

Canada was spending over 4 percent of GDP on the military until 1962, but after falling below 2 percent in 1988, it never recovered.

For Canada, there appears to be a complacency that it can make do for today. This is symbolic of what Leuprecht calls the “Walmart approach” to defence spending—getting what you need for a reasonable price.

“But our posture and our ability to keep on doing what we’re doing is at great risk if we don’t make a significant reinvestment in the Canadian armed forces in the foreseeable future,” Leuprecht said.