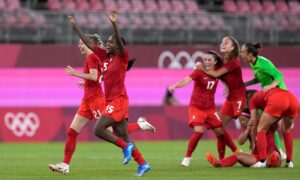 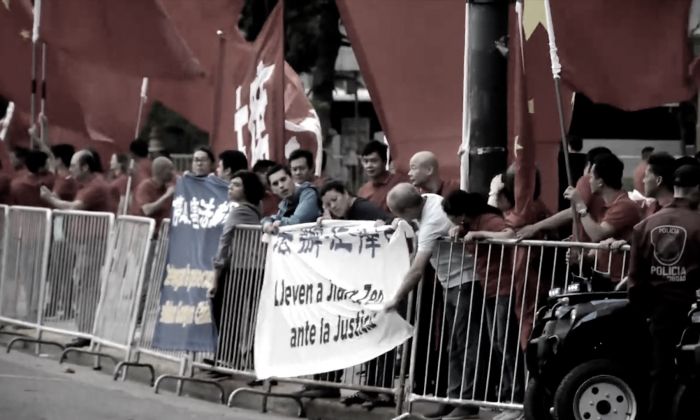 Nine Argentine Falun Gong practitioners hang two banners on the crowd control barriers, which say “Stop the persecution of Falun Gong” and “Bring Jiang Zemin to Justice” in Spanish and Chinese. The practitioners are surrounded by supporters of the Chinese Communist Party sent to welcome Chinese leader Xi Jinping. (Screenshot via YouTube)
Americas

Demonstrators peacefully protesting human rights abuses by the Chinese regime ahead of the G-20 summit in Buenos Aires, Argentina, were arrested and detained after being told by police they were not permitted to protest the Chinese communist regime.

Practitioners of the spiritual discipline Falun Gong gathered on Nov. 29 near the Sheraton Buenos Aires Hotel, where Chinese leader Xi Jinping stayed, to protest the communist regime’s 19-year suppression of their faith. About a dozen demonstrators stood behind metal barricades and held two banners calling for an end to the persecution of Falun Gong in China.

Footage of the incident obtained by The Epoch Times shows several police officers confiscating the banners, which escalated to a situation akin to a “tug-of-war,” with police on one side and demonstrators on the other pulling on the banner. The demonstrators can be heard imploring the police to stop, while police can also be seen addressing the demonstrators.

A demonstrator involved in the incident, Natividad Almaraz, 25, said a male police officer told her they were told the demonstrators were not allowed to be there because they were protesting against the Chinese regime.

The demonstrators were surrounded by hundreds of Chinese Communist Party (CCP) supporters, wearing red polo shirts and waving large Chinese flags. Such groups are known to be organized by local Chinese embassies when CCP leaders go on state visits.

In the video, one man from the pro-CCP group jabs his flagpole into the tussle in an apparent attempt to get the demonstrators to release their banner. Later on, several members of the CCP’s group can be seen quickly grabbing and balling up flyers dropped from the bag of a practitioner.

The banner is eventually seized by police, and the demonstrators are arrested and led to an area nearby.

As police lead away a male demonstrator, a man wearing a suit, understood to be the officer-in-charge, points to the demonstrator’s bag and says, “He has a bomb in there.” Police can later be seen searching the bag and returning it to the owner after finding nothing suspicious.

At one point, the officer-in-charge tells the cameraperson, “[He or she] attacked a police officer,” as apparent justification for the arrests.

Nine demonstrators were arrested and detained overnight at a local police station. They were released in the afternoon of the following day without charges.

Local police did not respond to a request from The Epoch Times for comment.

Almaraz said that after the incident, a female police officer told her that she couldn’t help the demonstrators as the orders to stop them came from above, and there is a lot of corruption.

“The policewoman told me, ‘I know what [Falun Gong practitioners] do is good,'” Almaraz said.

Fu Liwei, another Argentine Falun Gong practitioner present during the incident, said that when she arrived at the demonstration, staff from the Chinese Embassy followed her and asked the police to arrest her.

“I asked a police officer, ‘Are you monitoring me or protecting me?’ He said, ‘Both,’” Fu said.

Sebastian Arcusin, one of the practitioners who was arrested, said the demonstrators were doing nothing illegal—they were peacefully protesting and calling for an end to the persecution in China.

“In China, our fellow practitioners are persecuted. They are tortured. Their organs are harvested. It’s genocide!” Arcusin said.

“We are here for them. We are asking to stop this persecution.”

The Falun Dafa Association in Argentina said in a statement on Nov. 30: “It was legal for Falun Gong practitioners to peacefully petition there. We will take legal action against the perpetrators [of the incident].”

Falun Dafa, also known as Falun Gong, consists of five meditation exercises and is based on the principles of truthfulness, compassion, and tolerance. According to Minghui.org, a clearinghouse for information about the persecution, Falun Gong is practiced by tens of millions of people in more than 110 countries worldwide.

Former CCP leader Jiang Zemin initiated the persecution in 1999. The sweeping repression has led to the confirmed deaths of more than 4,200 Falun Gong practitioners in China due to torture and abuse, though the actual number is suspected to be far higher. Large numbers are suspected to have been killed through having their organs harvested. Researchers have described this forced organ harvesting as a cold genocide.