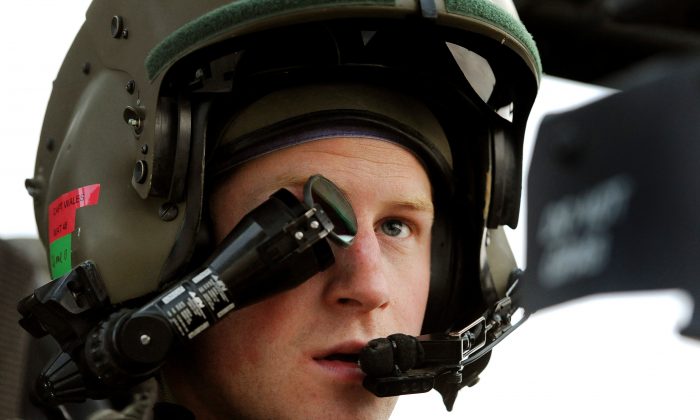 Prince Harry Partying Too Much, Gets Sent Back to Helicopter Training: Report

Prince Harry’s advisers believe he’s partying too much and hope to restrain him by sending him back to train to fly helicopters, according to a new report.

Harry, 30, was pictures smoking hookah and also reportedly danced all night while in Abu Dhabi recently, prompting the shift in his work.

Harry has been a desk-bound officer in London since February, but sources close to the Royal household said that this has left him with “too much time for partying.”

Harry served in Afghanistan as an Apache pilot and will now be undergoing training to fly the Lynx battlefield-support chopper, one of the fastest helicopters in the world.

“Given Harry’s time off from flying, he will probably need six months to fully convert to his new role,” a military source told the Daily Mail.

Harry has been itching to get away from his desk job and has wanted to get back to flying.

Apaches aren’t used in operations at the moment, while flying a Lynx Mk9A would enable Harry to carry out reconnaissance missions as well as ferrying passengers, or occasionally in combat.

On the other hand, it was reported earlier this month that eight Apaches could be deployed to the Middle East to fight the ISIS terrorist group.

“The Prince, who for the last year has had a desk job in Whitehall arranging ceremonial events and the Invictus Games, remains qualified as an Apache pilot,” reported the Express at the time.

“He is due for promotion from captain to major next year and is known to want to return to active service.”

Harry’s superiors have been impressed with his ability as a pilot, and have no worries about him training for another chopper.