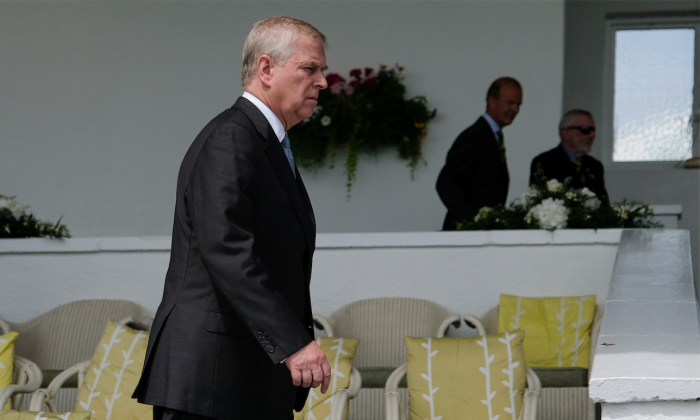 Prince Andrew broke his silence for the first time over the weekend and addressed his ties to recently deceased sex offender Jeffrey Epstein in a lengthy statement signed by him and issued from Buckingham Palace.

Prince Andrew claimed during his former relationship with Epstein they met “infrequently” and that he had no idea about the financier’s criminal behavior. Court documents say Epstein sexually exploited and abused dozens of minor girls at different locations, some as young as 14 years old.

Epstein was in a Manhattan jail, facing trial on child sex trafficking charges, when he was found dead in his cell on Aug. 10. His death was ruled a suicide by hanging by The New York City Medical Examiner’s office. Epstein’s lawyers said they are “not satisfied” with the results and have vowed to conduct their own investigation into his death.

“It is apparent to me since the suicide of Mr. Epstein that there has been an immense amount of media speculation about so much in his life,” Prince Andrew’s statement posted on Twitter on Aug. 24 read. “This is particularly the case in relation to my former association or friendship with Mr Epstein.”

The Duke of York said he first met Epstein in 1999 and that throughout the time they knew each other they met “probably no more than only once or twice a year,” though he admitted staying “in a number of his [Epstein’s] residences.”

“At no stage during the limited time I spent with him did I see, witness or suspect any behavior of the sort that subsequently led to his arrest and conviction,” the statement reads.

Epstein, who federal prosecutors say was worth more than $500 million, owned and maintained “luxury properties and residences around the world,” according to a bail memorandum by the Southern District of New York. They include a roughly 75-acre island located in the U.S. Virgin Islands, a mansion located in the Upper East Side of Manhattan, and a large property in New Mexico dubbed the “Zorro Ranch.”

The statement by Andrew comes a week after Buckingham Palace issued theirs addressing the ties. In that statement, the Palace said that Andrew was “appalled” at the recent reports and that he “deplores the exploitation of any human being.”

Nearly 2,000 pages of documents relating to Epstein were unsealed on Aug. 9. Virginia Giuffre, one of Epstein’s accusers, alleged she was directed to have sex with Prince Andrew, other powerful men, and “another prince.”

According to the documents, Giuffre said Epstein’s former girlfriend, Ghislaine Maxwell, directed her to have sex with the men. Giuffre’s lawsuit against Maxwell ended in both sides agreeing to settle in 2017 for an undisclosed sum.

“I have said previously that it was a mistake and an error to see him after his release in 2010 and I can only reiterate my regret that I was mistaken to think that what I thought I knew of him was evidently not the real person, given what we now know,” Prince Andrew continued.

He added that Epstein’s suicide left “many unanswered questions” and that he was “at a loss to be able to understand or explain Mr. Epstein’s lifestyle.”

Angela Levin, a royal biographer, criticized the prince’s latest statement, describing it as “staggeringly arrogant, disingenuous and dishonest” in an op-ed.

“Besides expecting our Royals not to hang around with pedophiles, we also expect them to be honest. This whole statement reeks,” Levin wrote in the Daily Mail. “Does Andrew really expect us to believe that someone he did not know well and only saw infrequently was invited into the Royals’ inner sanctum?”

Epstein pleaded guilty in Florida in 2008 to state charges of soliciting a child for prostitution under a non-prosecution agreement that required him to spend 13 months in jail and register as a sex offender. The agreement has been condemned for ending a broad federal child sex abuse probe involving at least 40 teenage girls, which could have landed Epstein in jail for life.

“Andrew simply cannot escape the fact that he stayed with Epstein once he was already on the sex offender register after serving time inside for sexual abuse,” Levin continued.