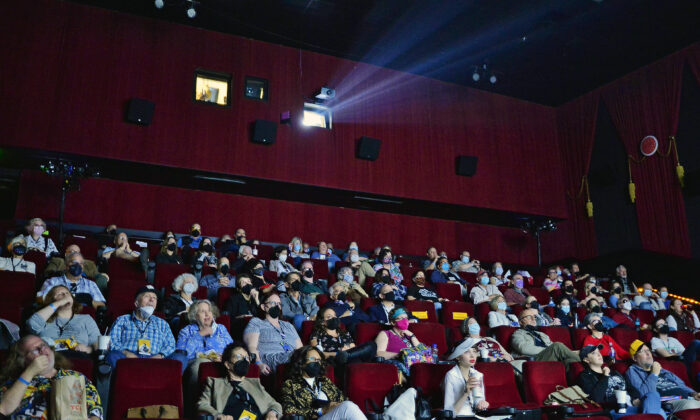 Festivalgoers attend the screening of "Pride of the Marines" during the 2022 TCM Classic Film Festival at the TCL Chinese 6 Theatres Multiplex in Los Angeles on April 22, 2022. (Jerod Harris/Getty Images for TCM)
Viewpoints

‘Pride of the Marines’ From 1945: The Sacrifice for Freedom

Independence Day is an opportunity to celebrate the liberties we enjoy here in the United States of America. Those liberties were not given to us. They were earned by patriots who gladly laid down their lives for their beloved country. A beautiful way to remind ourselves of this every day is to watch movies celebrating the sacrifice of soldiers in more recent struggles. Some of the best war films ever made are about World War II, many of them produced during the duration. I recently was introduced to “Pride of the Marines” from 1945, which was based on a true story.

Al Schmid (John Garfield) is a Philadelphia foundry worker who is dead set against marriage. He happily rents a spare room from his co-worker Jim Merchant (John Ridgely) and his family. However, Jim’s wife, Ella Mae (Ann Doran), is intent upon finding Al a girl who could become Mrs. Schmid. Frustrated by her attempts to fix him up, Al is downright rude when Ruth Hartley, Ella Mae’s former co-worker, comes over one evening. However, despite the rocky start, they begin seriously dating and find themselves falling in love.

Everything changes after Pearl Harbor. Two days later, Al joins the Marines, eager to put his recreational shooting hobby to practical use for his country. Always reluctant to be tied down, Al avoids making any commitment to Ruth in his final hours as a civilian. However, right before his train pulls out, they vow to wed when he returns home. Ruth is sustained by this hope, but all Al’s plans change when he is nearly blinded by a hand grenade while fighting on Guadalcanal. With the help of his loved ones, can he realize that life is still worth living?

This film was based on the true story of Al Schmid, a Marine who lost his vision when fighting on Guadalcanal. When actor John Garfield read about this veteran’s amazing story in a Life magazine article, he knew that Warner Bros. needed to make it into a movie. The movie star and former Marine met during the latter’s rehabilitation and remained close friends until Garfield’s death in 1952. Largely because of Garfield’s campaigning, Albert Maltz wrote a screenplay based on Roger Butterfield’s 1944 book about Schmid’s experiences, “Al Schmid, Marine.” The film was a great commercial and critical success, even earning Maltz an Academy Award nomination for Best Adapted Screenplay.

Its actual combat comprises less than one sixth of the runtime, yet this is one of the most intense war films I’ve seen. Although it lasts under twenty minutes, the war sequence is a tense, nerve wracking depiction of Al’s part in the Battle of the Tenaru. Overdubbed narration accompanies a blend of real war footage and Hollywood recreations of the Pacific conflict. Eleanor Parker’s sweet voice soon gives way to John Garfield’s gritty description of the conditions the Marines faced after landing on Guadalcanal.

“After we hit the beach, taking Henderson Field was pretty easy. Hanging onto it was something else. Then the Japs pulled back into the jungle. Things got plenty rugged. They taught us what infiltration really meant. They were good at it—too good. We learned a lot of lessons. Man, we had to. There wasn’t enough of anything—not even any mail, so we read our old letters over and over again. I got one letter off to Ruth. Then things got worse, and there wasn’t much time for writing.”

In real life, Al Schmid developed a serious infection in his foot before the battle, but he refused to be evacuated for medical treatment. Instead, he stayed with his two comrades in a three-man Browning (M-1917) heavy machine gun team, in which he was an assistant gunner/loader. The other two men were Lee Diamond and Johnny Rivers, played respectively by Dane Clark and Anthony Caruso in the movie. On the night of August 21, 1942, 800 Japanese infantry soldiers tried to break through the 2nd Battalion, 1st Marine’s barrier to recapture Henderson Field. During the assault, Rivers was killed, so Schmid took over the gun, firing it for more than four hours. Next, Diamond was badly wounded in the arm. Eventually, a hand grenade exploded in the machine gun position, blinding Schmid. Despite this, he continued loading and firing his machine gun, guided by Diamond’s directions. Only fifteen Japanese soldiers survived this battle, just one of whom was uninjured. Over 200 of these soldiers had been taken out by Schmid’s machine gun team.

Al Schmid was awarded the Navy Cross, which he received on February 18, 1943, at the Philadelphia Navy Yard “for extraordinary heroism and conspicuous devotion to duty while serving as a Machine Gunner of the Eleventh Machine Gun Squad, Company H, Second Battalion, First Marines, First Marine Division, in action against enemy Japanese armed forces at the Tenaru River, Guadalcanal, Solomon Islands, on 21 August 1942. Lacking the protection of riflemen, Private Schmid’s machine gun squad was forced to tear down its frontal protection to meet the oncoming strong Japanese landing force. In spite of tremendous difficulties, the enemy attack was courageously met and repulsed by fierce and determined fighting during which Private Schmid was seriously wounded. His personal valor and loyal devotion to duty contributed to the defeat of the enemy.”

At the beginning of this story, Al Schmid does not seem like an American war hero. He’s an average fellow who just wants to enjoy his life. He doesn’t even want the hassle of a wife, so why would he risk his neck for his country? Nevertheless, after Pearl Harbor forces the United States into World War II, he boldly joins the conflict long before being drafted, joking, “I bet it would be more fun to shoot Japs than bears.” His injuries in the South Pacific teach him that war is no joke. As surgery and treatments fail to restore his sight, as he was certain they would, he realizes he is not as invincible as he thought.

“Pride of the Marines” begins with Al genuinely describing Philadelphia, the birthplace of our nation, and how his hometown shaped him just like every other American: “This is Philadelphia, 1941. Everybody’s got a hometown; this one’s mine. My name is Schmid—Al Schmid. Maybe you’ve heard of me, maybe not. Anyhow, one way or another, what I’ve got to tell you starts here in Philly. I grew up here, used to go to places like Independence Hall—that’s where the Liberty Bell is and where the Declaration of Independence was signed. When I went to school, we used to visit the museums and the famous places like Constitution Hall—our first Congress met right here—and Tun Tavern where the US Marines were founded back in 1775. And this is where Betsy Ross lived. You heard about her, I guess. She made the first American flag. None of these things meant a whole lot to me then. When you grow up with something, you kind of take it for granted, and the reason you’re seeing these places now is just because this is where my story begins, but it could have begun anywhere. It could have begun in your hometown, maybe, and what happened to me could have happened to you.”

Many war films end with a battle being won or a soldier returning home. However, this film’s hero returns home from battle before the movie is even half over. His battle is just beginning, as he struggles to rebuild his war-torn life. One particularly poignant scene occurs in the San Diego Naval Hospital, where Schmid and several other wounded veterans complain about the problems they’ll face returning to civilian life. Realistically, the wounded and shellshocked men are bitter, hopeless, and afraid for their futures.

Soon, the conversation becomes a heated argument, as each man laments his personal struggles and dismisses his fellows’ hopeful plans. The GI Bill of Rights’ promises of education and employment are cold comfort to men dealing with blindness, laryngeal damage, paralysis, inability to do manual labor, and even racial discrimination. Before the debate comes to physical blows, Diamond reminds his comrades that the United States can be shaped by its people’s hard work: “You guys think because you did the front line fighting you can take a free ride on the country for the rest of your lives? No, sir. Look, there’s no free candy for anybody in this world. I know what I fought for. I fought for me, for the right to live in the USA. And when I get back into civilian life, if I don’t like the way things are going, okay—it’s my country. I’ll stand on my own two legs, and I’ll holler. And if there’s enough of us hollering, we’ll go places!”

This is a beautiful, patriotic movie which will remind any American that our nation is the greatest country in the world. Every true patriot, soldier and civilian alike, should be proud after watching this dramatic, moving story of an American hero’s life. If Diamond’s speech about the United States doesn’t move you, how can you call yourself an American? “One happy afternoon when God was feeling good, he sat down and he thought up a rich, beautiful country, and he named it the USA. All of it, Al, the hills, the rivers, the lands, the whole works. Don’t tell me we can’t make it work in peace like we do in war. Don’t tell me we can’t pull together. Don’t you see it, guys? Can’t you see it?”