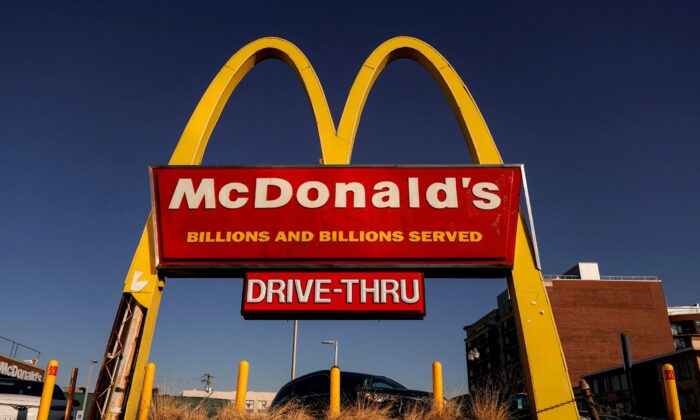 The logo for McDonald's restaurant is seen in Arlington, Va., on Jan. 27, 2022. (Joshua Roberts/Reuters)
US

Menu price hikes and a new loyalty program helped McDonald’s Corp. beat estimates for quarterly sales and profit on Thursday, despite inflationary pressure on consumers, the war in Ukraine, and COVID-19 lockdowns in China.

Pinched by higher costs for gas, rent, and groceries, lower-income customers are starting to buy cheaper or fewer McDonald’s menu items in some areas, Chief Executive Officer Chris Kempczinski said in a call with investors.

In “certain parts of the business and in certain geographies, there is a little bit of a trade down that we’re seeing that we’re just keeping an eye on,” he said. “We need to make sure that we continue to have value be an important part of our proposition.”

Even so, the world’s largest burger chain saw little resistance to menu prices that were roughly 8 percent higher in the first quarter versus the prior year.

Most U.S. restaurant chains have raised prices to offset soaring costs for everything from worker salaries to beef and paper packaging.

McDonald’s commodity costs roughly doubled even since the previous quarter in the United States and Europe and are now as much as 14 percent higher for the year, Chief Financial Officer Kevin Ozan said.

Even so, global comparable sales rose 11.8 percent, above estimates for an 8.2 percent gain. Total revenue increased 11 percent to $5.67 billion, beating expectations for $5.59 billion.

The introduction of a digital loyalty program late last year—which now has 26 million members—also helped drive a 3.5 percent increase in first-quarter comparable sales in the United States, its biggest market.

Analysts expected an increase of 3.3 percent, according to Refinitiv IBES.

McDonald’s is losing roughly $55 million a month to pay staff, landlords, and suppliers “for keeping the infrastructure going” for its restaurants in the Ukraine and Russia, Ozan said.

McDonald’s, one of the first Western brands to enter Russia after the fall of the Soviet Union, said in early March it would suspend operations in Russia after Moscow invaded Ukraine.

After shutting restaurants, McDonald’s lost $100 million due to the likely disposal of inventory in its supply chain, it said.

Kempczinski said the company is analyzing its options in the region and expects to provide clear direction to investors no later than the end of the current quarter.

Rosinter Restaurants Holding PJSC, which operates more than 200 restaurants in Russia including nine McDonald’s locations, on Thursday reported a net profit for fiscal 2021 of $1.32 million (94.8 million roubles) versus a loss of $25.5 million (1.83 billion roubles) the previous year during the pandemic.

Excluding costs to support the company’s business in Russia and Ukraine as well as other one-time expenses, McDonald’s earned a profit of $2.28 per share, besting estimates of $2.17.