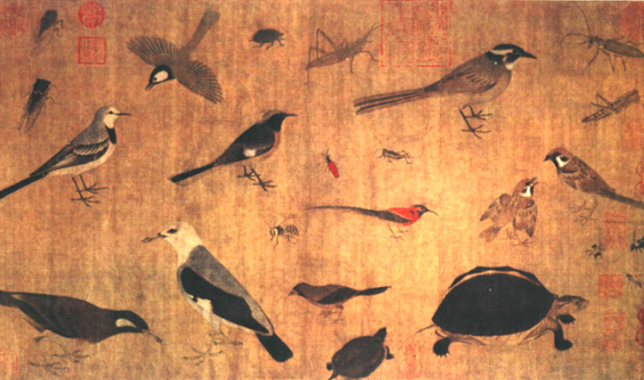 Sketch of Rare Birds by Huang Quan. The painting represents 20 animals dominated by birds including two bees and a wasp. (Supplied)
Australia

Prevalence of Bees in Art Shows Positive Association With Humankind

A new study of bees in creative practices throughout the ages from ancient carvings and historic cave art to the big screen and across social media has revealed that we’ve always had a friend in bees.

First author Kit Prendergast, from Curtin’s School of Molecular and Life Science, said that bees have long provided artistic inspirations with their hardworking spirit, sacrifice, and sweet contribution to humans.

“Looking back at some of the early records of human representations in cave art dating back more than 8,000 years to art by the ancient Mayans of South America, we found that humans have had an enduring relationship with bees,” Prendergast said in a release.

The researchers also found that positive images of bees in art may have been inspired by the sweetness of honey.

“There are links between the sweet-tasting nutritious food that could have acted to condition positive responses in the brain, leading to the development of an aesthetic appreciation of work representing bees,” according to the paper published in Art and Perception.

This aesthetic appeal endures today, with bees represented in a remarkable variety of mediums and platforms ranging from Pokémon characters, including Combee, to the 3D-printed beehive structure that NASA says could be our future home on Mars.

“These examples clearly show how bees have been deeply rooted in the way different people around the world perceive and relate to bees through creative practice,” Prendergast said.

She also hoped that we can harness the aesthetic connection to bees shown in the study to support efforts to address the underlying threats that may drastically affect their future.

“There is increasing scientific and public awareness that bee species face many threats, including extinction due to the impact of the expansion of human industrialised living and agricultural practices, habitat fragmentation, increased urbanisation, and pesticide use.”

For example, the Hive, a 14 metre aluminium honeycomb structure, was built to bring attention to honeybee decline. A spokesman said the work was “inspired by scientific research into the health of honeybees and has become a visual symbol of the challenges facing bees today.”

Co-author Associate Prof. Adrian Dyer, from RMIT University, said that the consistent appearance of bees in art shows the positive effect that bees have had on humanity.

“The frequent bee art themes show our common understanding in human culture of how important bees are to how we live and prosper,” Dyer said.