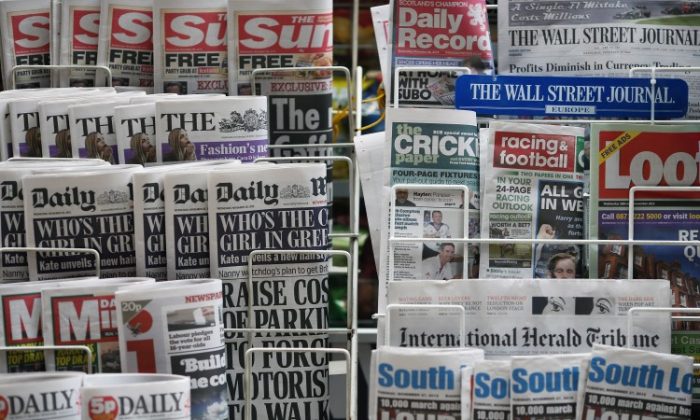 Newspapers are displayed on a stand outside a newsagent on Nov. 28, 2012 in London, England. British politicians reached a deal on contentious press regulations early March 18, 2013. (Dan Kitwood/Getty Images)
Europe

Press regulations have been much debated among British politicians since the media phone-hacking motivated an inquiry in 2011. The three main parties reached a deal on the contentious regulations early Monday morning.

Early Monday morning, a cross-party agreement was reached over press regulations, the source of much contention.

Following revelations of large-scale phone hacking by some British media outlets, the three main parties of the British government have been unable to agree on regulations that would stem similar problems, yet maintain the freedom of the press.

Prime Minister David Cameron would have likely faced an embarrassing defeat in a House of Commons vote Monday night had a deal not been struck in the morning.

Harriet Harman, deputy leader of the Labor Party, told ITV: “I think we have got an agreement which protects the freedom of the press, that is incredibly important in a democracy, but also protects the rights of people not to have their lives turned upside down.”

In a five-hour meeting, representatives of each party made some concessions: Edward Miliband, opposition leader of the Labor Party; Nick Clegg, leader of the Liberal Democrats; and Oliver Letwin, Cabinet Office Minister representing Conservative Prime Minister David Cameron, met in Miliband’s office to hammer out the deal.

One of the key results is that a statutory clause will protect the new regulations from being easily changed by future parliaments. The press Royal Charter will only be amended if two-thirds majority in both parliamentary houses approve it.

Cameron had ended negotiations Thursday night with a rejection of this clause. The issue was that the clause would bring press regulations into the realm of statutory law, which Cameron feared could endanger press freedom.

The politicians got around this issue by leaving the specific name of the press Royal Charter out of the clause. Press regulations thus steer clear of statutory law, but the clause still applies in practice to protect the regulations from future changes.

The Labor Party and Liberal Democrats have been demanding statutory press regulations, but they conceded to form Monday’s deal.

Another major player in the press regulation debate, campaign group Hacked Off, has accepted the compromise.

Evan Harris, former Liberal Democrat MP and associate director of Hacked Off told the Guardian: “The victims are prepared to accept this compromise. However … we’re not saying it is Leveson, but it is near Leveson.”

Lord Justice Leveson was appointed chairman of an inquiry into the media phone-hacking scandal in July 2011, and released a report with recommendations in November 2012. The regulations formed by the politicians incorporate many of the Leveson recommendations.

Academics from the Department of Media and Communications from Goldsmiths, University of London weighed in.

“It is not in the interests of democracy that the UK’s leading print media institutions are cowered, humiliated, fearful, disempowered and ‘controlled’ or ‘punished’ by the introduction of any form of general state supervision of the regulation of its published content over and above the laws applied to everyone in respect of libel, contempt, privacy and copyright,” said Professor Tim Crook, Senior Lecturer in Communications, in a statement.

“At last the balance is shifting, giving journalists greater rights to snap at the heels of those in power, while protecting the innocent from having their lives raked over to increase tabloid profits,” said Angela Phillips, Senior Lecturer and Chair of the Ethics Committee, Media Reform Coalition in a statement.

Index on Censorship CEO Kirsty Hughes is not happy with the deal.

“Politicians have now stepped in as ringmaster and our democracy is tarnished as a result,” she told the British daily Express.

“Requiring a two-third majority from both Houses for future changes in the Royal Charter introduces political involvement for all time into press regulation in the UK … The fact that this requirement is now being applied to all Royal Charters is a rushed and fudged attempt to pretend this is not just a press law,” she said.

A panel will regulate the press, including one member appointed by the newspaper industry. In earlier drafts of the regulation, that one member needed the unanimous support of the rest of the panel.

This point will placate Hacked Off, which has been adamant that the industry representative should not have veto power.

The Journalist’s Code of Conduct will be established by editors, journalists, and lay people equally. The regulatory body will judge how the code applies to particular cases. Before the deal, Cameron’s regulations gave more power to editors to form the code, thus allowing the industry to essentially evaluate itself, argued Hacked Off.

The regulatory body will have greater power over directing newspaper apologies.
The regulators’ approval of a paper will only be withdrawn if the paper repeatedly fails to meet standards.