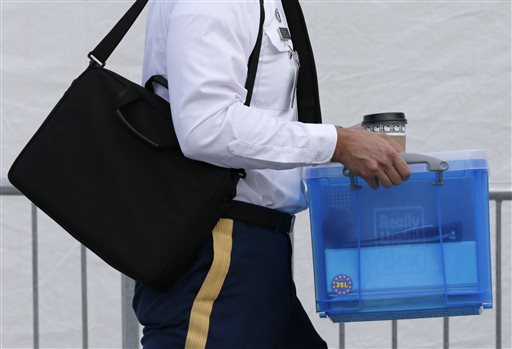 In this June 7, 2012 file photo, Capt. Joe Morrow, a prosecutor in the case against Pfc. Bradley Manning, carries documents into a courthouse before a pre-trial hearing in Fort Meade, Md. Government secrecy in the court-martial of Manning, who gave reams of classified documents to WikiLeaks reaches a new level this week. The military judge has ordered an apparently unprecedented closed hearing Wednesday, May 8, 2013 to help her decide how much of Manning's trial will be closed to protect national security. (AP Photo/Patrick Semansky, File)
US

After the U.S. government refused to release transcripts of the Bradley Manning court proceedings, and denied 280 out of 350 media organizations that applied for press passes, the Freedom of the Press Foundation launched a campaign to fund a team of stenographers—those people who type out transcripts of what is said in court cases—to sit in the media room at the trial.

“Journalists covering Manning’s case face many Kafkaesque obstacles, but nothing is more punitive than the government’s refusal to provide a timely and accurate transcript. By funding a court stenographer, we hope to help journalists in their effort to report on the trial,” said Laura Poitras, a documentary filmmaker who serves on the board of directors of Freedom of the Press Foundation and attended Manning’s Article 32 hearing, in a statement.

Yet, at least for the first day of the trial (today, June 3), a stenographer has made it into the trial, after Nathan Fuller of the Bradley Manning Support Network gave up his media pass.

The transcript of the first day of the proceedings will be up at the latest 9 a.m. tomorrow, said Trevor Timm, executive director of the Freedom of the Press Foundation.

The case comes after a group of organizations tried to make public the court documents and proceedings in trial, but were denied by the nation’s top military court.

In an April 16 ruling, the U.S. Court of Appeals for the Armed Forces said it doesn’t have the authority to rule on public access in the Manning trial. The case, filed by the Center for Constitutional Rights and supported by 32 news and other organizations, could go to the Supreme Court, according to Rosanna Cavanagh, executive director of the New England First Amendment Coalition.