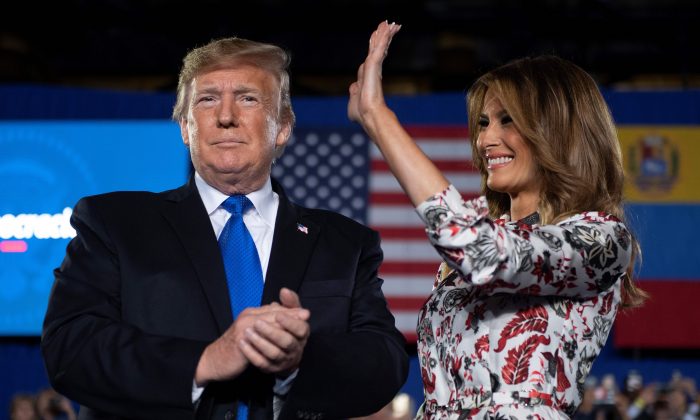 President Trump: ‘The Days of Socialism and Communism Are Numbered’

In landmark speech on Venezuela, Trump says 'the twilight hour of socialism has arrived' around the world
By Bowen Xiao

By supporting a peaceful regime change in Venezuela, the United States has paved the way toward purging South America of socialism and creating the first fully democratic Western Hemisphere in history, President Donald Trump said in a speech in Florida on Feb. 18.

Trump, a critic of socialism and communism, told the Venezuelan community in Florida that recent changes in South and Central America suggest that the path toward democracy on the two continents is irreversible. The president pledged the support of the United States to Venezuelans who “are standing for freedom and Democracy.”

“We’re here to proclaim a new day is coming in Latin America,” Trump said. “In Venezuela and across the Western Hemisphere socialism is dying and liberty, prosperity, and Democracy are being reborn.”

The president reiterated his support for Venezuela’s interim President Juan Guaidó. Trump was the first world leader to recognize Guaidó as the legitimate leader of the South American nation. Guaidó assumed the position of interim president shortly after the Venezuelan National Assembly declared socialist dictator Nicolas Maduro as “illegitimate.”

Trump told the crowd that Venezuela should cease to be a puppet state of the communist regime in Cuba. Nearly 92,700 Cuban communist proxies work in Venezuela’s government apparatus, according to the Congressional testimony by a retired Venezuelan military official. Senior U.S. administration officials have said that Venezuela is being propped up by the communists in Cuba. White House Director of Strategic Communications Mercedes Schlapp told Fox News on Feb. 18 that Cuba has sent more than 20,000 security force personnel to Venezuela.

“Maduro is not a Venezuelan patriot. He is a Cuban puppet. That’s what he is,” the president said.

“For decades the socialist dictatorships of Cuba and Venezuela have propped each other up in a very corrupt bargain. Venezuela gave Cuba oil. In return, Cuba gave Venezuela a police state run directly from Havana. But this is a much different day and those days are over.”

Successful and peaceful regime change in Venezuela would spark change and promote democracy in Cuba and Nicaragua, Trump told the crowd. In 2018, the Trump administration dubbed Venezuela, Cuba, and Nicaragua the “troika of tyranny.” In November 2018, National Security advisor John Bolton said that the socialist dictatorships in the three nations are the “genesis of a sordid cradle of communism in the Western Hemisphere.”

Trump’s comments on Feb. 18 are the latest in an intense campaign of tightening sanctions and bold rhetoric which started early in his presidency. Although the Trump administration took steps to counter human rights abuses in Cuba and Nicaragua, the bulk of the pressure from the White House has so far fallen on Venezuela. Trump’s comments suggest that Washington hopes that Caracas will be the first domino in a chain reaction akin to the fall of communism in Europe decades ago.

“The twilight hour of socialism has arrived in our hemisphere and, frankly, in many many places around the world,” Trump said. “The days of socialism and communism are numbered not only in Venezuela but in Nicaragua and in Cuba as well.”

During his presidential campaign, Trump did not focus on the threat of socialism and communism to the United States and the world. But, since taking office, the president has made the fight against socialism and communism a key part of his agenda. At this year’s State of the Union speech, he said that “America will never become a socialist country.”

Trump has also lambasted communism and socialism on the world stage. The president told the United Nations in September 2017 that “anguish and devastation and failure” followed wherever these ideologies were adopted. In November 2017, Trump told the National Assembly in South Korea that communism is to blame for the contrast between the desolation and famine in North Korea and progress and prosperity in South Korea.

Once an oil-rich nation Venezuela has been crippled by the socialist policies implemented by Maduro and his predecessor. Almost 90 percent of Venezuela’s population live below the poverty line and more than half of families are unable to meet their basic food needs, according to Mercy Corps, a humanitarian group. The U.N. estimates that by the end of 2019, 5.3 million refugees and migrants will have fled the socialist regime in Venezuela.

“Socialism has so completely ravaged this great country that even the world’s largest reserves of oil are no longer enough to keep the lights on. This will never happen to us,” Trump said as the crowd cheered in response.

Message to the Military

“If you choose this path,” Trump said, warning Maduro’s backers, “you will find no safe harbor, no easy exit and no way out. You will lose everything.”

The Trump administration previously said they were contemplating whether to lift sanctions on military members who side with Guaidó. One U.S. official said the United States is directly communicating with members of Venezuela’s military and urging them to defect, although the official noted that such discussions were “very, very limited.”

Venezuelan military officials have continued to remain loyal to Maduro, largely because of the wealth they have gained from corruption, drug trafficking, and revenues from the petroleum trade. A U.S. admiral said at a recent Senate Armed Services Committee that Venezuela has about 2,000 generals.

“Today I ask every member of the Maduro regime. End this nightmare of poverty, hunger, and death. Let your people go. Set your country free,” Trump said.

Maduro has continued to refuse to allow humanitarian aid into Venezuela, which has been piling up in the Colombian border city of Cúcuta. On Feb. 16, three U.S. military cargo planes landed in Cúcuta carrying 180 tons of humanitarian aid—it was the second such shipment from the United States.

“He would rather see his people starve than give them aid,” Trump said.

The heavily guarded warehouse in Cúcuta is one of three points from where an attempt will be made on Feb. 23 to deliver the aid into Venezuela; Guaidó hopes that will drive a wedge between Maduro and military forces who continue to support him, despite popular discontent. The United States has pledged $20 million to alleviate the suffering in Venezuela.

The other two locations are Roraima in northern Brazil, and the Dutch Caribbean island of Curacao. When the day comes, military figures will face the choice of disobeying Maduro’s orders and letting the much-needed supplies into the country, or remain loyal to him and block the aid’s entry, potentially sparking a confrontation with crowds desperate for food and medicine.

Maduro claims the decline of his country is a result of U.S.-imposed sanctions and that Venezuelans “are not beggars.” His regime placed an oil tanker and shipping crates on Feb. 6 to barricade a bridge that was intended to be used to deliver the aid, sparking an international standoff about Venezuela at the border.