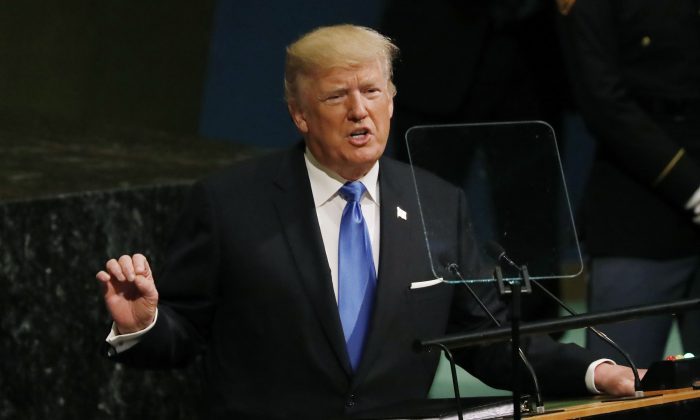 President Donald Trump called out “true socialism and communism” in a speech before the U.N. General Assembly, saying they are failed ideologies and bring damage to the world.

“From the Soviet Union to Cuba, to Venezuela, wherever true socialism or communism has been adopted, it has delivered anguish and devastation and failure,” Trump said in his speech at the 72nd U.N. General Assembly on Sept. 19.

“Those who preach the tenets of these discredited ideologies only contribute to the continued suffering of the people who live under these cruel systems,” he said.

Trump specifically called out North Korea, Cuba, and Venezuela as examples of dictatorships where communist and socialist ideologies still prevail.

“No one has shown more contempt for other nations and for the well-being of their own people than the depraved regime in North Korea. It is responsible for the starvation deaths of millions of North Koreans, and for the imprisonment, torture, killing, and oppression of countless more,” he said.

According to the United States Commission on International Religious Freedom, over one million North Koreans have died from starvation and disease over the last 10 years.

According to the State Department , the regime conducts extrajudicial killings, disappearances, arbitrary detention, arrests of political prisoners, and torture.

“The government subjected citizens to rigid controls over many aspects of their lives, including denial of the freedoms of speech, press, assembly, association, religion, movement, and worker rights,” says the report.

President Trump said in his speech that “The socialist dictatorship of Nicolás Maduro has inflicted terrible pain and suffering on the good people of that country.”

Under Maduro’s rule, Venezuela has seen inflation rates as high as 800 percent, the collapse of the economy, and a lack of basic goods such as toilet paper, medicine, and food. Instead of responding to the crisis with reform, Maduro’s government has doubled down on its socialist policies, taking control of more private businesses, and using disputed elections to install a constitutional assembly that governs outside of congress and has the ability to change the constitution.

Millions of Venezuelans have taken to the streets in recent months, calling on Maduro to step down.

“The Venezuelan people are starving and their country is collapsing,” Trump said. “This corrupt regime destroyed a prosperous nation by imposing a failed ideology that has produced poverty and misery everywhere it has been tried.”

At a meeting with Latin American leaders on the evening before his U.N. speech, Trump spoke with them on how to respond to the crisis.

According to a statement by the White House, the leaders discussed how to restore democracy in Venezuela and how “to improve security in the Western Hemisphere, advance prosperity, and ensure sovereignty through democracy and rule of law.”

“As a responsible neighbor and friend, we and all others have a goal,” Trump said in his speech. “That goal is to help them regain their freedom, recover their country, and restore their democracy.”

The Trump administration imposed sanctions aimed at targeting Maduro’s regime, while not causing unnecessary harm to the Venezuelan people, in August.

Trump also called out the Cuban dictatorship, saying his administration will not lift sanctions on Cuba until fundamental reforms are made.

A decision by President Barack Obama in 2016 to ease sanctions on Cuba has been widely criticized for not doing enough to improve Cuba’s human rights and end the oppression of its people.

“The profits from investment and tourism flow directly to the military. The regime takes the money and owns the industry,” Trump said in a speech in Miami in June.

Among other things, Obama ended the wet foot, dry foot policy, which gave Cubans who fled the communist country and made it to America an automatic legal status.

Speaking at the U.N., Trump said that “America stands with every person living under a brutal regime.”

“All people deserve a government that cares for their safety, their interests, and their well-being, including their prosperity.”