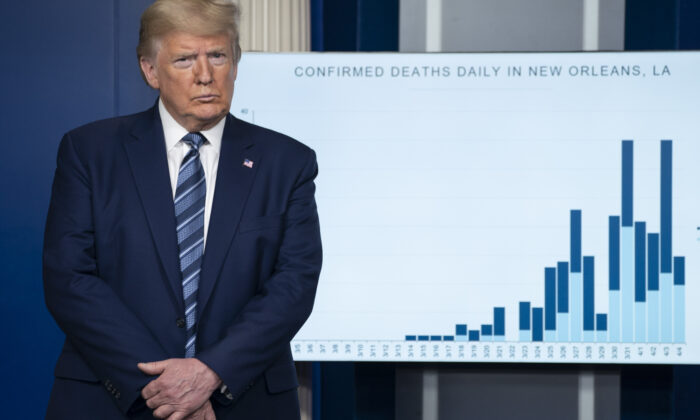 Trump Has Approved Major Disaster Declarations for All 50 States

All 50 states and territories in the United States have now been approved for major disaster declarations, President Donald Trump announced at the daily White House Coronavirus Task Force briefing April 5.

The major disaster declaration provides a wide range of federal assistance programs for individuals and public infrastructure, including funds for both emergency and permanent work. The United States is already under a national emergency declaration issued March 13, which freed up $50 billion in emergency relief funds for cities and states.

“I just want to say … this is an all-out military operation that we’ve waged and especially over the last number of weeks. Fifty states and territories have now been approved for major disaster declarations, which is very unusual thanks to the Army Corps of Engineers,” Trump said.

The president also noted that New York City’s Javits Center is now one of the largest hospitals in the United States, and “staffed by hundreds of federal medical personnel deployed from two army hospital units,” which he said are “doing a great job.” Trump said that his administration would be delivering an additional 600,000 N95 masks to the city on Monday to “take care of the needs of the public hospital system.”

Ventilators will also be delivered by the Federal Emergency Management Agency (FEMA) to hard-hit states, including Louisiana, which will be receiving 200. Michigan will get 300, Massachusetts will get 100, New Jersey will get 500, and 600 will be going to Illinois, Trump said.

Trump also thanked Gov. Jay Inslee of Washington for returning 400 ventilators that they no longer needed, which can now be deployed elsewhere in our country. He said Inslee felt “confident that they are in good shape for the coming weeks until we can declare a final victory.”

“As of Tuesday, we’ll have deployed over 3,000 military and public health professionals to New York, New Jersey, Connecticut, and other parts of our country. Three thousand, and that number is going up, and we hope we’re seeing a leveling off in the hottest spots of them all. So we’ll see. You’ll be seeing that over the next few days. Let’s see what happens. But we’re prepared,” Trump said.

Additionally, 1,200 brand new rapid point-of-care testing kits, which take 15 minutes to produce a result, and which the president said are “very fast and very accurate,” will be distributed to public health labs by Tuesday. Trump added that more are being produced and will be sent to other countries in the future.

The president also said that 1.67 million Americans have now been tested and given the results for the virus. He noted that the United States would “endure the peak of this terrible pandemic” in the coming days before thanking the “incredible doctors and nurses and healthcare workers on the front line of the fight,” which he called “warriors.”

His administration is also purchasing and stockpiling hydroxychloroquine, a drug that has been traditionally used to treat malaria, lupus, and rheumatoid arthritis. The president has touted the drug as a means to combat the CCP virus and previously called a “game-changer.”

Doctors in the United States are currently prescribing hydroxychloroquine, as are France and Bahrain, while India has recommended it for health care workers. Despite it showing promising results, health officials have warned the public to remain cautious until larger clinical trials validate smaller studies.

Among them is Dr. Anthony Fauci, the United States’ leading infectious disease expert and a member of the White House Coronavirus Task Force. At a White House news conference on March 20, he said data on the drug so far “was not done in a controlled clinical trial. So you really can’t make any definitive statement about it,” and that only such studies would determine if the drug was truly safe and effective.