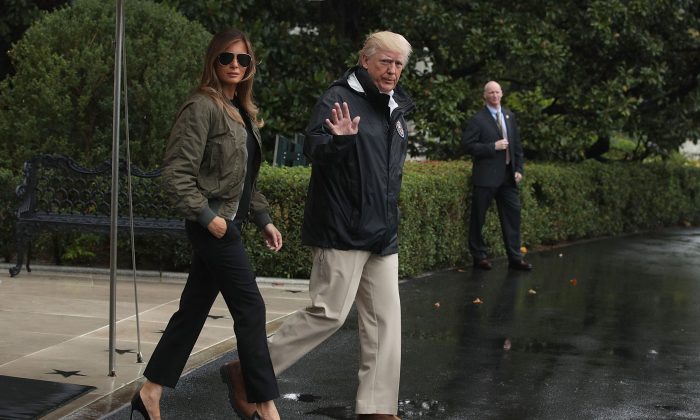 President Donald Trump walks with first lady Melania Trump to Marine One at the White House on Aug. 29, 2017. (Alex Wong/Getty Images)
US News

President Donald Trump blasted media organizations in a speech in Alabama for their coverage of his trip with First Lady Melania Trump to hurricane-hit Texas late last month.

In his speech at a rally to support Sen. Luther Strange in the Republican primary runoff for the special election for Jeff Sessions’s Senate seat, Trump took aim at media organizations for their dishonest reporting.

He cited the example of many news organizations coverage of Melania Trump’s outfit as she left the White House en route to Texas.

Media organizations criticized the first lady for wearing high heels as she was leaving the White House to board the Marine One helicopter that took her and the president to the airfield.

The New York Times published a column headlined “Melania Trump, Off to Texas, Finds Herself on Thin Heels,” in which the author said that the shoes were seen as a symbol of the disconnect between the Trump administration and reality.

“It is precisely the superficial nature of clothing, the fact that garments are immediately accessible to all, that makes them the go-to stand-in for more nuanced, complicated emotions and issues,” said the article.

When Melania Trump arrived in Texas, which had just hit by its most damaging natural disaster in its history, she was wearing sneakers that she had brought with her.

“They went after her … and they know it was dishonest,” Trump said.

Trump said that the first lady was wearing high heels, coming from the White House, because she respects it.

He also cited the example of media organizations reporting in August that the president had called the White House a dump.

“They actually said about me that I called the White House a dump, I think the White House is one of the most beautiful buildings I’ve ever seen, I speak of it with reverence,” Trump said. “They wouldn’t retract it, and I hated it.”

Trump and the first lady ended up visiting disaster-struck Texas twice, and Louisiana once, following Hurricane Harvey. They also visited Florida, which was hit by Hurricane Irma earlier this month. The federal response to the hurricanes has been widely praised. Federal authorities were in contact with state and local authorities well before the hurricanes and had deployed personnel and equipment for the rescue efforts.

“I’ve got to tell you, I give FEMA a grade of A+, all the way from the president down,” Texas Governor Greg Abbott said on Aug. 27.

Trump signed multiple disaster relief declarations providing the states with the necessary funding for the rescue efforts. Congress also passed a bill that provides Texas and Louisiana with over $15 billion in aid earlier this month.

The president also donated $1 million of his own money to 12 different charities involved in relief efforts.