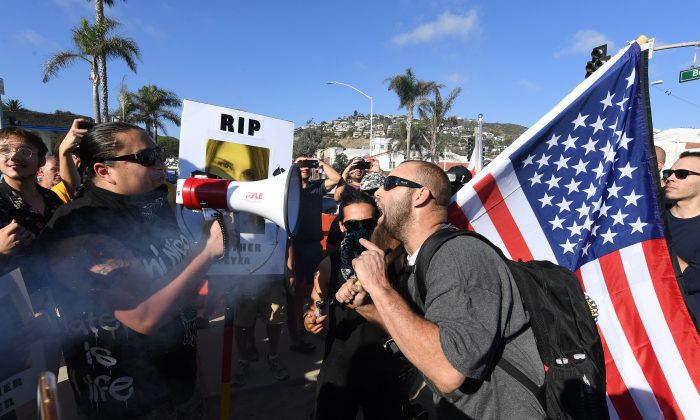 Protesters argue with each other at dual rallies in Laguna Beach, California, on Aug. 20, 2017. (Mark Ralston/AFP/Getty Images)
US

President Trump Calls on Nation to Embrace Patriotism and Unite

President Trump is calling on Americans to unite and stand strong together as one nation.

Speaking on his administration’s new strategy for the war in Afghanistan, Trump said that he believed patriotism is the key to heal America’s divide.

“When we open our hearts to patriotism, there is no room for prejudice, no place for bigotry and no tolerance for hate,” he said while speaking in Fort Myer, Virginia, on Aug. 21.

Trump’s words recalled a few sentences from his Inaugural Address: “At the bedrock of our politics will be a total allegiance to the United States of America, and through our loyalty to our country, we will rediscover our loyalty to each other. When you open your heart to patriotism, there is no room for prejudice.”

In recent days Trump had tweeted about how America has been divided for decades and his belief that the country will heal and will be stronger than before.

The president used America’s armed forces as an example of unity.

“By following the heroic example of those who fought to preserve our republic, we can find the inspiration our country needs to unify, to heal and to remain one nation under God,” he said.

Trump has said that he believed both sides carried some of the blame for the violence that saw dozens killed and one 32-year-old woman tragically killed when a car believed to be driven by a neo-Nazi supporter drove into a crowd.

Over the past week Trump denounced white supremacists and groups such as the KKK and neo-Nazis multiple times, while also calling out far-left protesters such as the far left Antifa extremist group who are known to be dressed in all black and resort to violence.

“The men and women of our military operate as one team, with one shared mission and one shared sense of purpose,” Trump said.

Trump described their cohesion as one that transcends every line of race, ethnicity, and creed.

“They are all part of the same family. It’s called the American family. They take the same oath, fight for the same flag and live according to the same law,” Trump said.

In his comments Trump encouraged loyalty to the nation saying “Loyalty to our nation demands loyalty to one another.”

He also said that “Love for America requires love for all of its people.”

He expressed his hopes that Americans can find the courage to heal the divisions from within.

“We cannot remain a force for peace in the world if we are not at peace with each other,” Trump said.

He expressed his hopes that the men and women who fight America’s wars overseas are able to return to a nation that is not at war with itself at home.

“Let us make a simple promise to the men and women we ask to fight in our name, that when they return home from battle, they will find a country that has renewed the sacred bonds of love and loyalty that unite us together as one.”

On the war in Afghanistan Trump said that he is determined to see the war come to a successful conclusion. Citing the withdrawal of troops from Iraq in 2011 and the subsequent growth of ISIS and other terror groups, Trumps said he wanted America not to make the same mistakes again.