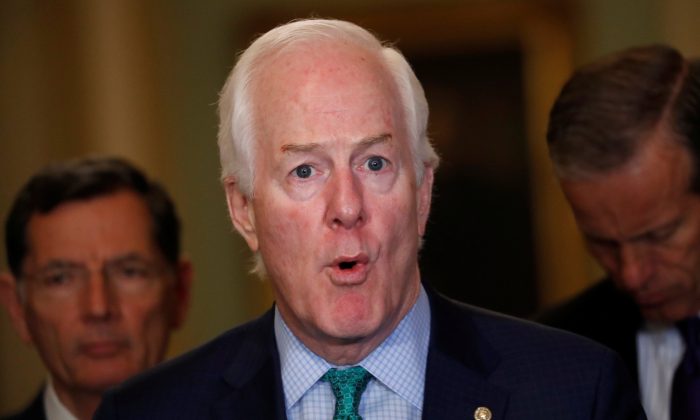 Senator John Cornyn speaks to the media during a news conference at the U.S. Capitol in Washington, on May 22, 2018. (Leah Millis/Reuters)
US-China Relations

WASHINGTON—Senate Republicans and President Donald Trump met on June 5 at the White House to discuss a measure before Congress aimed at tightening investment rules to better protect national security.

Senator John Cornyn (R-TX) has spearheaded efforts in Congress to win passage of a bill to tighten oversight by the inter-agency Committee on Foreign Investment in the United States (CFIUS). The measure, which is aimed at keeping China from acquiring high-end U.S. technology, has been put into a must-pass defense policy bill called the National Defense Authorization Act (NDAA).

“This is not a trade issue. This is a national security issue,” Cornyn told reporters. “It is directed at the most egregious offender of this process, which is China, and I believe it’s something that’s very important in our national security.”

The White House said in a statement in January that it supported Cornyn’s measure.

Cornyn said he would be accompanied at the meeting by fellow Republican Senators David Perdue (GA), Tim Scott (SC) and Michael Crapo (ID).

Senate Majority Leader Mitch McConnell said on the Senate floor on June 5 that the chamber would “soon” focus on the NDAA and will be debating it “in coming days.”

The CFIUS measures are among a series of measures being considered by the White House and Congress to address what it sees as China’s unfair trade and market access practices. Others include potential tariffs on Chinese goods ranging from aluminum to automobiles, and efforts to prevent the growth in the United States of Chinese telecommunications companies Huawei and ZTE.

The White House also reached an agreement with ZTE that would lift a U.S. Commerce Department ban preventing the company from buying U.S. tech parts and software. The Chinese company has signed and agreed in principle, according to sources familiar with the matter.

The Chinese company ceased major operations since the seven-year ban was imposed on the company in April for breaking a 2017 agreement reached after it was caught illegally shipping goods to Iran and North Korea.

A Commerce Department spokesman said on June 5 that “no definitive agreement has been signed by both parties.”

The preliminary deal includes a $1 billion fine against ZTE, plus $400 million in escrow to cover any future violations, sources said while requesting anonymity because they were not authorized to publicly discuss the matter.

The Commerce Department plans to amend its 2017 settlement agreement and count the $361 million ZTE paid earlier as part of the new fine, allowing the United States to claim a total penalty of as much as $1.7 billion, the sources said.

Over the weekend, ZTE signed the agreement drawn up by the United States, the sources said, but the amended settlement has not been signed.

U.S. President Donald Trump met with trade advisers to discuss China’s offer to import an extra $70 billion of American goods—mostly agricultural and energy commodities—over the period of one year, as a way to defuse a potential trade war between the world’s two largest economies.

Trump tweeted last month that he told Commerce officials to find a way for ZTE to resume operations, later suggesting penalties of a $1.3 billion fine and changes to its board and top management.

As part of the deal, sources said, ZTE promised to replace its board and executive team in 30 days. It would also allow unfettered site visits to verify that U.S. components are being used as claimed by the company, and post calculations of U.S. parts in its products on a public website, they added.

Origins of the U.S. Probe

The probe found that ZTE had conspired to evade U.S. embargoes by buying U.S. components, incorporating them into ZTE equipment, and illegally shipping them to Iran.

ZTE, which devised elaborate schemes to hide the illegal activity, agreed to plead guilty after the Commerce Department threatened to cut off its global supply chain. The company was allowed continued access to the U.S. market under the 2017 agreement.

As part of a new agreement, the sources said, ZTE will retain another compliance contractor in addition to the three-year court-appointed monitor imposed by the plea agreement.

The sources said ZTE also agreed to allow U.S. representatives to make site visits without coordinating with Chinese government officials, as required by a non-public agreement between the countries.