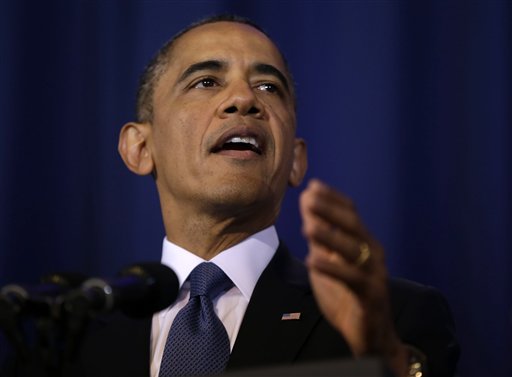 President Barack Obama talks about national security, Thursday, May 23, 2013, at the National Defense University at Fort McNair in Washington. Declaring America at a "crossroads" in the fight against terrorism, the president revealed clearer guidelines for the use of deadly drone strikes, including more control by the U.S. military, while leaving key details of the controversial program secret. (AP Photo/Pablo Martinez Monsivais)
US

Drone strikes by the United States against American citizens are legal, but only used after considerable review and only in situations where capture of the targets isn’t possible, said President Barack Obama on May 23.

Obama, speaking a day after Attorney General Eric Holder disclosed details of the U.S. drone policy, said that criticism over drone strikes against terrorists, including the citizen casualties that sometimes come from such strikes, is credible. He said he is haunted by the loss of innocent lives from the strikes.

“I must, as commander in chief, weigh these heartbreaking tragedies against the alternatives,” Obama said, at the National Defense University. The main alternative is to do nothing in the face of terrorist threats, he said.

The other option in the face of terrorist networks is to use “conventional military options,” said Obama, which would ultimately incur more citizen casualties, “empower those who thrive on violent conflict,” and in some cases “trigger an international crisis.”

Most importantly, the targeted terrorists are behind attacks that have taken out a number of civilians, a number that “dwarfs any estimate of civilian casualties from drone strikes. “

The strikes are only carried out when foreign governments cannot–or will not–carry out missions against these terrorists, who often make their bases in typically uninhabitable parts of countries such as Yemen or Somalia.

In Attorney General Holder’s letter, Holder said that the United States has only specifically targeted one American citizen, Anwar al-Awlaki, who led an al-Qaeda affiliate based in Yemen. Three others have been killed inadvertently during drone strikes since 2009.

Obama said that al-Awlaki could not be captured and was “continuously trying to kill people.”

“I would have been derelict in my duty had I not authorized the strike that took him out,” said Obama.

The drone strikes in general, and other forms of lethal force, have put al-Qaeda operatives in a state that they’re spending more time thinking about their own safety than planning attacks against the United States, said Obama.

“The core of al-Qaeda in Afghanistan and Pakistan is on the path to defeat,” he said.

Obama said Congress is briefed on every strike that America takes, including the targeted take-out of al-Awlaki, and that he wants Congress to explore some of the ideas floating around to introduce different elements into the decision-making process, though each idea has positives and negatives.

A special court to ponder each strike would bring in the third branch of government, but “raises serious constitutional issues about presidential and judicial authority,” he said. Meanwhile, an independent oversight board would avoid that problem but could “introduce an extra layer of bureaucracy … without inspiring public confidence.”

At the same time, the United States needs to address issues that underlie terrorism, such as “patiently supporting the transition to democracy in Egypt, Tunisia, and Libya,” and strengthening the opposition in Syria. In these and other countries, the United States should help countries modernize economically and increase education, said Obama.

Foreign aid is “fundamental to our national security,” part of the long-term strategy to battle extremism, and costs only a “tiny fraction of fighting wars,” he said.